“The worldâ€™s most ambitious mobile learning company” is introducing engaging learning apps based on sound pedagogy.

When I founded Slate & Tablets a year and a half ago with my brother, I didnâ€™t have any of the answers to any of these questions. In fact, I knew absolutely nothing about programming, running a company, how to create digital interfaces, and how to use a Mac.Â  I was 24 years old and all I knew was teaching and what I saw in my own and my colleagueâ€™s classrooms. I saw something that most teachers probably see â€“ students who would rather be texting, surfing Facebook, playing video games, or listening to music.

This should not be mistaken for a lack of motivation. In fact, students these days are probably more motivated than they ever have been, itâ€™s just that they donâ€™t necessarily want to learn about chemistry, the civil war, or multiplication tables. A lot of people blame it on the content and say â€œif we can make the content more relevant then the students would want to learn moreâ€. That seems like a lot of work â€“ think of the bureaucratic hoops weâ€™d need to jump through to get the curriculum changed! The solution is simpler than that: make school work as addicting as Facebook, Twitter, and YouTube are.

Despite seeming impossible, this doesnâ€™t require as much of paradigm shift as some might think. In fact, great pedagogy is already effective and getting back to what makes for effective learning can do much to help. Iâ€™m going to use one of our apps being launched on September 4th as an example: Atom-Builder. With it I will show a few simple steps that anyone can take to beat the distractions that are grabbing our studentsâ€™ attentions. 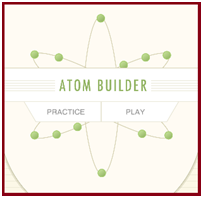 The first step is to make it a game. Kids of all ages love games and will be far more motivated to play any game than they will to study chemistry. Atom-Builder is a game that asks students to correctly build as many atoms as they can before time runs out. There are other bells and whistles, like students earning more points for stringing multiple correct answers together, putting time on the clock with each correct answer, and earning achievements for specific in-game feats, but at its core itâ€™s just a worksheet with a short timer. Any teacher can make that happen in their class tomorrow.

The second step is to provide some sort of reward for performing well. As with the first step, this is nothing revolutionary in the world of teaching. In Atom-Builder, students get a leaderboard where they see how well theyâ€™re ranking against everyone else in the world. Why not make one for your class for one particular topic?Â  Competition is a part of success, academic success included.

The third step is that the game or activity is easy to learn. There do not need to be a million rules or thirty layers of complexity to keep a childâ€™s attention, it just needs to be easy to learn and provide a sense of improvement when a child spends more than three minutes playing. Any teacher reading this will know how vital it is to keep activity instructions short and concise, as well as the positive effects of well placed praise. 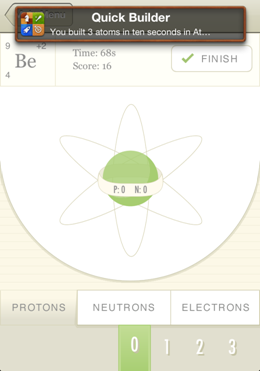 The last step is the most important: what the student does in class must reach home in some way. For most teachers, this is mistaken for homework which is not even necessary in many cases. Atom-Builder fits in studentsâ€™ pockets, it posts their achievements to their friends, with iOS 6 it will post them to Facebook, and we tweet at students who use Twitter to discuss the game. The great teachers know that contacting home for positive things goes a really long way, but we can do more than that. Approaching a student with a group of their friends in the cafeteria and saying â€œHey, Ron managed to do 10 atomic structure problems correctly in five minutes yesterday,â€ is not magic, but timeless pedagogy.

The technology we create at Slate & Tablets makes all of this easier for the teacher, which is why we use it in the first place. The reason itâ€™s successful though has little to do with a revolution in the way students learn. I would argue that all we do is take great teaching and put it in a studentâ€™s pocket. The moral here is that while confronting new frontiers of technology in the classroom, itâ€™s never been more important to simplify. Does it simply and straightforwardly help your students learn? I am proud to have created tools where the answer to that question is â€˜yesâ€™.

Matt Meyers teaches chemistry in a Connecticut High School. While not teaching, he creates free apps for iOS.Â  For more information about Slate & Tablets or to contact Matt, send an email to mistermchem@gmail.com.Â

Related Posts (if the above topic is of interest, you might want to check these out):
The Gamification of Education and Cognitive, Social, and Emotional Learning Benefits
Introducing a Game-Based Curriculum in Higher Ed
5 Fun Free iPad Math Game Apps