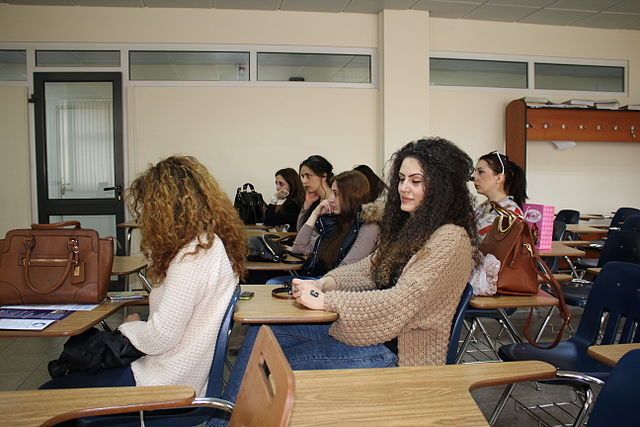 Teaching is a tough job at the best of times, but when you have students that suffer from serious visual impairments it makes things just that much harder. Accessibility technology has helped ease that additional burden for decades, but not until today has the technology become this convenient, effective and affordable.

In this article I want to highlight five innovative technologies that teachers are already incorporating into the classroom to make the lives of visually impaired students a little easier.

One of the best things about modern technology is that so much of the mainstream tech we use is finding its way into accessibility applications. This is good because the cost of specialized hardware and software has made the lives of visually impaired students very difficult indeed. By using mass-produced off the shelf components those costs are driven down and that can only be a good thing. The best example of this is the smartphone, which weâ€™ll start our list with.

While the almost universal shift to touchscreens may seem like a bad idea for visually-impaired users, the truth is that powerful smartphones have brought more to the table than the lack of tactile buttons takes away.

Having a small, affordable and powerful computer in your pocket means that many things you would have needed an expensive specialist device for before is now available as an app.

For example, camera reader apps allow you to point the smartphoneâ€™s camera at a sign or a page of text and it will read it out loud using text to speech software. This makes it easier to get information from the environment without the need to convert text into braille.

Smartphones also provide access to voice control and recognition software. This means ebooks can be read out loud by the software and digital assistants such as Siri can do web searches and a whole host of other functions just by asking.

Converting texts to braille is a long and expensive process. Braille books are expensive just as physical objects as well. Consequently only a small fraction of texts are available in braille. By using a handheld scanner pen a visually impaired user can read any print text straight off the shelf. As you can imagine this is a pretty important advantage and saves a lot of money in the long run since you can use any standard text for teaching.

Thereâ€™s a whole range of options available when it comes to these devices and they have a variety of additional functions depending on which one you opt for. For example, many of these readers have onboard memory so that you can actually store the text to listen to later.

We live in an age of technophilia and professional gadget lovers. Which is why everyone needs to be computer literate if they want to hold a job or do modern work.

From the early days computers have incorporated accessibility features, but never have they enabled users as extensively as they do today. Modern screen reader apps give voice feedback for everything on-screen and are very well integrated into the operating system. The most popular package for Windows is most likely JAWS, although itâ€™s not a free product and can cost a pretty penny.

Smartglasses are a revolutionary application of modern computer miniaturization. Using tiny computer components and sensors they allow visually impaired individuals to do things that few would have imagined just five years ago.

The most advanced product is undoubtedly the eSight which, while very expensive, can restore normal vision to some legally blind individuals. If the eSight is out of reach there are other simpler, less expensive video magnifier devices that allow severly nearsighted students to do things like watch a video in a class setting or see a blackboard.

I donâ€™t know if youâ€™ve noticed, but all the screens we use on a daily basis are flat and smooth, whereas Braille is a technology that requires tactile feedback. Displaying Braille on such a screen is pointless, so wouldnâ€™t it be great if we had screens you could feel Braille on for real?

Of course, this technology already exists and is known as a â€œrefreshable braille displayâ€. The current mainstream design uses rows of mechanical pins that can be raised and lowered electronically. The user runs their fingers across the rows and reads the output from the computer as if it were a printed braille book.

Because the technology is mechanically complex and needs to stand up to much more wear and tear than an LCD monitor, these displays are pretty darn expensive. They are also usually limited to 40 or 80 braille characters or â€œcellsâ€ at once, to keep the cost down.

The good news is that new technology may be bringing us a whole new generation of tactile displays. Tactile touchscreens are in development and have the potential to bring the direct readability of computer displays in line with what sighted users are used to.

I Can See Clearly Now

Medical technologies to cure or improve the conditions of those with visual impairments show a lot of promise and are always marching on, but until we cure blindness for good it will always be necessary to provide the right type of education for those who live with this disability.

It can be a tough road for both teacher and student, but by using the right tools at the right time itâ€™s possible to avoid the dreaded gap that develops academically between sighted and visually impaired students. Thanks to our latest technological innovations disabled students can keep up and excel academically in ways that just werenâ€™t possible in the 19th and 20th centuries.