We are inseparable from our smartphones these days, and the visually impaired among us are no different.

This piece of tech has grown increasingly impressive and we have come to rely on it to aid us in all areas of life.

The learners and educators among us should be particularly pleased. Though a touch-based interface that relies heavily on the use of vision may not strike as being helpful to the visually impaired, a number of software and app developers have understood the needs of the blind and introduced features that render smartphones and tablets of great use to them.

For teachers who are genuinely interested in helping their visually impaired students excel, here are some tools that you may want to consider making use of (if you arenâ€™t already doing so).

If you own an iOS device, go to Settings â€“ Accessibility, and slide the VoiceOver toggle on. (Even if this sounds rudimentary, this has to be mentioned because itâ€™s a one-of-a-kind feature that is unique to Apple devices.)

The iOSâ€™s VoiceOver feature is a very nifty tool when it comes to using iPhones, iPads, and Macs, so we recommend keeping it on for all the apps on this OS.

It reads out everything on the screen of your phone — the icons, the menus, the features, the emails, the Twitter feed, as well as any Web pages loaded. It also assists you when using the keyboard so that you know exactly what you are typing.

Its â€˜rotorâ€™ function allows users to give a number of commands such as skim through Web pages or spellcheck documents.

The built-in voice can be accessed in 30 languages, making it useful in a classroom high on international presence.

It does take some getting used to, but if you are a fan of using iPads in the classroom, you can now encourage your students to tap into this feature and start using their mobile devices more often. This would also tremendously aid their on-the-go learning.

If you need more help with this, hereâ€™s a youngster demonstrating how the visually impaired can make the most of their iPads: http://www.youtube.com/watch?v=W7lvQkT1U18.

Android offers the TalkBack feature which helps navigate the mobile device and reads out options. Itâ€™s not as smooth or as seamlessly integrated with other apps as VoiceOver, and does not read out Web pages, emails, or books. It does, however, at times assist with using the keyboard. For the visually impaired, the iOS seems to be the best platform.

This â€œrevolutionaryâ€ app allows the visually impaired to type on their iPhone or iPod Touchâ€™s touchscreen using Braille, with some reporting a typing speed of 30 words per minute or more.

You get a touchscreen braille keyboard which helps you compose emails, tweets, and text messages. One can also copy and paste their writing onto some other app.

If the concept is intriguing you, hereâ€™s a detailed explanation on how BrailleTouch works. It will take some getting used to but those who have used it say itâ€™s not difficult to learn.

The full version comes at a steep price of $20, but seeing as one spends more on pizzas each week, itâ€™s probably a very wise investment for the visually impaired.

The app is not compatible with iPad yet, but given that it gives the blind greater control over conducting their day to day online communication, you could perhaps get your institute to pool resources and help your students download this app to their phones.

This app primarily creates general lists but can be used for learning purposes. Use its features to help your students organize any kind of information they want. Regardless of the discipline being taught, all information can be broken down into lists to aid mnemonic memorizing.

While the app primarily records lists, it also supports multimedia, and more pertinently, audio files. It lets you record anything you want and organizes it efficiently. Using it is a breeze and so is sharing the audio files.

The best part about List Recorder is that you donâ€™t need to use your eyes to create, organize, or find lists.

This is possible via a combination of audio recording and a use of custom motions and gestures.

The tilt and swipe functions help the visually impaired find the list(s) they want. Tilt right and tap to add an item. Tap once more to begin recording. Tilt left to go back.

Once you get used to the motions, you will find it very easy to use.

Used alongside the VoiceOver app, your students will be able to have the stored information read out to them at their convenience. 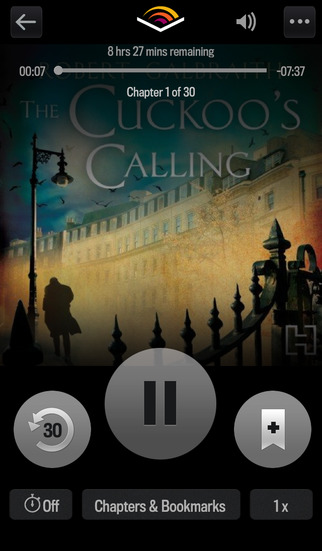 Podcasts are a great way to learnnew material, but for those who prefer full-length books, Audible can be carried on their mobile devices to listen to the books whenever and wherever.

It comes as no surprise then that Audible is the top favorite audio book app for the visually impaired.

Listening to a book is engaging, while also allowing students to learn the correct phonetic sounds and pronunciation of words. It helps in memorizing material as one can simple speak along with the recorded voice.

The app itself is very easy to use. It remembers where you left off the last time and resumes the audio book from that point.

Since it integrates with VoiceOver in iOS devices, navigating within the app is not difficult.

Set it up for your students to aid their learning out of the classroom. Thereâ€™s also a visually impaired Audible Listener group on Yahoo where students can find book or periodical recommendations, depending on their interests. 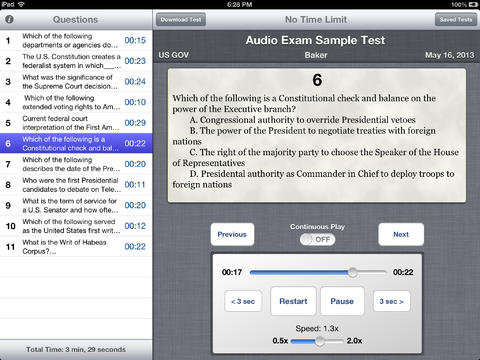 Help your visually impaired students avoid any embarrassment caused by having to be read exam questions out loud to them.

Audio Exam Player will do it for them in a human or mechanical speech (the app works with VoiceOver). Students can download exams via this app to their phones and have it read out the questions for them, without requesting any help from the teacher, supervisor, or the reader in the classroom.

This saves time and awkwardness, freeing up students to focus on and formulate best answers instead of trying to sound out words.

The interface of the app is intuitive and easy to use. A few taps can pull up any question the students may want; questions can also be replayed, paused, and skipped, giving students complete control over their exams and the order in which they may want to proceed.

Apart from English, the app supports five languages â€“ French, German, Italian, Dutch, and traditional Chinese. Spanish seems to be the notable omission, and the app could do with more language support.

We are only, of course, scratching the surface here with our suggestions. The key lies in making the most of a select few apps to help your students tackle their learning better. This is going to require a lot of patience on your part, and also continuous learning about newer apps (since this is a fast moving space) that can further aid your teaching goals. But if you are passionate about helping your students succeed, you already have some very good tools at your disposal to make that happen.

Related Posts (if the above topic is of interest, you might want to check these out):
This Free Website Provides an Alternative Pathway to Vocabulary Development
Dozens of iPad Apps for Young Students on the Spectrum, at Your Fingertips
Learning Disability Apps and Important Innovations Under Way