The Avaz App for Autism is a Highly Rated Application from a Recognized Innovator.

In 2012, we saw some serious movement in the educational technology market. From Massive Online Open Courses (MOOCs) to iPad apps, the industry is seeing rapid progress on the wings of technology. Today, I will introduce you to another innovation that is positioned for rapid adoption.

Introducing the Avaz App for Autism
Electrical engineer Ajit Narayanan was in the right place at the right time, poised to welcome the impending tablet revolution. But it wasnâ€™t until 2008, when Ajit was approached by the special needs-focused NGO Vidya Sigar, that he began to consider the impact the technology might have on special education. Tracking the development of assistive technologies for children who cannot speak, Vidya Sigar noted an increasing prevalence of tablets in use for assisted learning in the U.S. However, they feared that a price tag of over $5,000 would be an insurmountable obstacle for most Indian families. They hoped that Ajitâ€™s expertise might provide the Indian market with an affordable equivalent. 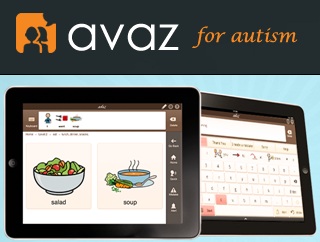 Ajit was attracted by the possibilities, and in 2009 presented his business partners with his tablet: Avaz. Initial introduction proved a challenge; though the product was widely successful both commercially and critically, it ultimately proved to be too niche a product in a growing market. Upon release of the iPad and Android tablets, Ajit quickly shifted focus to producing an app version of his product. Avaz was released in Android form in 2010, with the iPad version on the market in 2012.

How Avaz Works
Avaz today is an app designed to assist to children communicate non-verbally by addressing their difficulty in processing information such as letters, words and sentences. The app reworks the information into easy-to-understand pictures, rerouting through visual pathways rather than verbal ones. Avaz is prescribed through therapist evaluation for purchase by the childâ€™s parents or through the schoolâ€™s therapy program. Gradually introduced, the software becomes a part of the childâ€™s life as it helps them to communicate in both academic and social environments. Taking a holistic view of the language development process, Avaz teaches the child underlying patterns of language while seamlessly integrating with existing methods of speech therapy. Moreover, the app is very easy to customize, allowing users to add a new phrase in just 15 seconds. And itâ€™s available on the App Store for $99.

While several apps available on the App Store target communication development, Avaz is the only one to focus solely on autism, incorporating additional audio and visual reinforcement to combat common sensory difficulties. The app also supersedes competitors in aesthetics, as Ajit took a strong stance on the need for the app to be visually appealing as well as functional.

Addressing a Growing Problem
Avaz addresses a problem that has grown in recent decades: 1 in 88 children are diagnosed with autism in the U.S., with numbers even higher in less developed nations. But despite a matching trend toward developing assistive technologies for use on tablets and smartphones, Ajit must also combat cultural resistance to technological intervention and therapy. India, for one, is against its use for assistive speech development, as some feel it creates a false hope that the child in question will regain normative patterns of speech. In such a new market, building awareness is crucial, and combating myths and misconceptions essential.

But Ajit and Avaz are not without support, as the site of their headquarters, Chennai, is at the forefront of special education in India. Avaz receives substantial assistance from the IIT Madras Research Park there, in addition to sharing their Rural, Technology and Business Incubator.

And Ajit has only to share some of his daily experiences working with his technology to prove its power to change lives. Avaz has helped a young Indian boy move out of his special education class as he gained the ability to participate and communicate, such that he will soon graduate among his peers. Ajit and his business partners dream that Avaz will bring him to college, and give him a job and a life never before possible.

Receiving Recognition and Plaudits Across the World
Rated as the #1 speech assistive device/app in India, Avaz is quickly gaining traction with speech therapists in the U.S., Europe and Australia. User and expert reviews are overwhelmingly positive, and it is the only app of its kind to receive a five-star rating in the App Store. Whatâ€™s more, by providing previously speechless children with the ability to communicate, Avaz relieves frustration on both sides. It also alleviates the behavioral issues often associated with the condition.

Ajit receives international emails on a daily basis that validates the results of the technology. Stories of a mother who could hear for the first time what her child wanted for dinner. Of a child picking out his own books at the library and reading them with his therapist. Such stories are what dreams are made of.

For his work, Ajit was nominated to the MIT Technology Review global list of 35 young innovators. He hopes to use Avaz as a starting point and build a repertoire of technology-based solutions for the autism community, as well as expand into applications for other communication disabilities.

We are hopeful for Avazâ€™s future as a major innovator in the learning disability app category.

It is not at all a stretch to imagine that Ajit Narayananâ€™s vision of becoming the premium vendor of learning disability apps worldwide will bloom into reality.

Related Posts (if the above topic is of interest, you might want to check these out):
A Deeper View â€“ Changing the Special Education Playing Field
Helping Autistic children learn with Video Modeling techniques
Internet Resources for teachers working with Hearing Impaired students