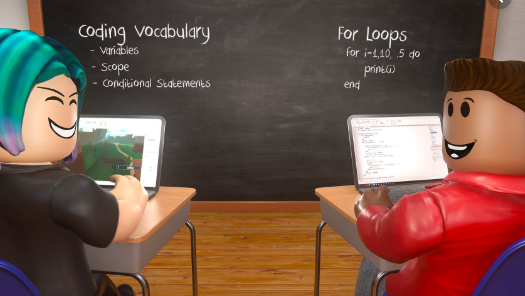 The popular platform (second in line behind Minecraft) is seeing increased use in schools and classrooms.

Roblox is a cross-platform hit game that was launched long ago (for the game industry) in 2005. Surprisingly for everyone in the realm, it surpassed the incredible milestone of 100 million monthly active users in August 2019. This achievement puts Roblox in line with the former absolute leader among games for children, Minecraft.

Immense popularity with younger generations leads both titles to invade the educational field. Following Minecraft, Roblox launched its proprietary program, Roblox Education, in May 2018. According to the TechRadar report, it was previously successfully tested in 500 coding camps across the EU, US, Canada, and Asia and involved over 50,000 students.

Today developers are working to make this program more commonly used, so they distribute free course manuals for both students and educators who want to integrate Roblox. Now let's explore it more closely.

The fact that children love playing video games doesn't need any proof. Concerns about the safety of this kind of entertainment haunt parents all over the world, so here are some arguments to stop worries.

Gamification is an institutionalized approach to education. It revolves around informal learning based on solving real-life situations using game elements. It usually involves gadgets connected to the Internet to let students collaborate, share, and remain competitive.

Today's version of Roblox is a sandbox online environment that provides students with approachable instruments for coding, learning game design, and sharing result with tens of millions of users. It means that players are the real creators of virtual worlds within Roblox. Worlds from a library of – yes, it's a real number – 56 million games. You can even make a studio with your children and make money creating playable quality titles. That's what over 2 million users actually do on the platform.

In plain words, financial literacy is about how you deal with the money you have. The in-game economy system of Roblox allows creators (anyone) to sell virtual stuff within their games if they become popular. They can even set trade game passes.

The great aspect of this system is that there's no way to make deceptive deals. Users buy something only if it provides some fresh, engaging experiences. As a result, those who make games have to come through a challenging path to profits.

The next natural step is to redeem income. The virtual credits, Robux, are convertible into USD. This way, Roblox works on the same basic principle as the entire game development business. The user manual includes essential knowledge and subtleties of developer's accounting, product advertising, creating high-quality designs. No matter how old your children are, they can earn money on Roblox legally. It can work as their first bank!

It's still impossible to know the particular income of users. Judging by Engadget's report, creators make from $250 to millions. By the words of Roblox permanent SEO David Buszucki, 2 developers managed to earn around $2 million each in 2017. The sum has probably doubled since then because of the platform's explosive growth.

RobloxEdu website offers several ready-made free lesson materials, including lesson detailed plans and challenges for students. You can apply them in your class without changes or adapt for the level of particular classes and individuals. Exercises vary from basic high-level coding training to creating properly functioning multiplayer games. Combining coding tasks with other subjects, such as history, maths, or geography, you can boost the value of classes.

Another great thing about this game is cross-platform accessibility. Of course, it's better to study coding on a computer, but what about optimization? Android, iOS, and Xbox One require a specific approach, and that's where Roblox can teach students about the distribution of calculations, error detection, client-side performance monitoring, and many more complicated things. Any problems are fixable with knowledge from exercises. Different platforms also provide opportunities for scripting controls for different types of input, such as gamepads, keyboards, and touchscreen.

Roblox provides a Parent's Guide that includes tutorials on how to create secure and engaging experiences for children. You can study them to learn something new and be more involved in your kids' virtual life. There's even a mobile app for supervising viewed content and incoming messages from other users. It's a good way to avoid being intrusive and let your children feel independent.

Partnership coding camps are already widely known in the US, Canada, UK, Russia, Brazil, Hong-Kong, Japan, France, Netherlands, and Singapore, but that's only a part of the coverage. It's impossible to count it but easy to find on the website of educational programs, such as CodaKid, Code Kingdoms, ID Tech, and many more local establishments.

Traditional schools integrate Roblox as well. Garrison Forest School, Maryland, applies Roblox in Lower and Middle School programs to let their students be as versatile as possible. Middle School head Shannon Schmidt says that a combination of teaching approaches lets students be â€œa writer, then a runner, and a scientist all on the same day.â€

Bucks County Community College offers Roblox game design courses. As their board told us, the courses involve kids in cooperative work that results in playable games published on the special Black Rocket website.

Ronan, 12, who attended the CodaKid camps, says that learning functions, loops, and conditionals within his own projects gave him an idea of how coding knowledge is helping his future. Nina Traviesa, a mother of a 12-year-old Mary, said to us that her daughter plays Roblox every day and learns basics of programming there since 2016 when the Educational program didnâ€™t exist.

You can also visit review sites like Commonsense Media to check out reviews, and you will notice that nearly all reviews submitted before 2016 have negative commentaries. The current version is way different due to improved moderation and surveillance features for parents.

The main goal of Roblox and its educational initiative is to gather people around peaceful, cooperative activities and create something new together. Roblox Product Managers Matthew Dean and his brother grew up creating games in Roblox, and now they are one of the key personalities in the development team.

Roblox has prospects for creating complex technologies for solving scientific problems in the future. Roblox Education seems to be only the beginning on the way to valuable achievements. The example of Mr.Dean and his brother proves that even those funny games that your children create in Roblox have a chance to grow into something unexpectedly big.