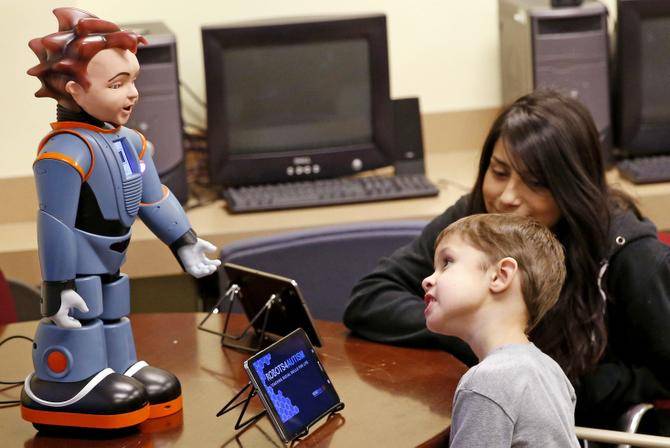 “This robot, programmed to teach kids about a wide range of social interactions, is proving more successful than humans in helping children with autism, by a long shot.”

I recently had the pleasure of talking with Dr. Pam Rollins, anÂ associate professor in the School of Behavioral and Brain SciencesÂ at UT Dallas. Rollins played a pivotal role in the development of Milo, working with a team of autism experts and robotics designers to create Robots4Autism.Â Milo is an artificially intelligent robot with a full range of facial expressions to interact with children who have ASD.

Dr. Rollins has been studying and researching autism since 1982, and bought her expertise to the team at Robots4Autism as they worked to develop Milo. Children with autism often struggle with the development of social skills. There are many potential benefits of using an engaging, child-like robot to interact with young students on the spectrum:

These are just some of the reasons Milo and the technology behind this adorable robot are making a big difference for kids on the spectrum. As stated in this video (below) from a piece CNN did on Milo,Â “This robot, programmed to teach kids about a wide range of social interactions, is proving more successful than humans in helping children with autism, by a long shot.”

In one test, children were engaged with Milo an average of about 87% of the time, versus a level of just 3% engagement with the human co-therapists. That is a startling difference in effectiveness!

With around 1 out of 68 children born in the U.S. having some form of autism (according to the CDC), the potential for this exciting technology to help them is enormous.

To learn more about Milo and the work that RoboKind and Dr. Rollins are doing, check out their site at Robots4Autism.com. Those wishing to further explore the work on Dr. Rollins may wish to explore her book,Â Facilitating Early Social Communication Skills: From Theory to Practice.

*Thanks to DallasNews.com for permission to share this photo!