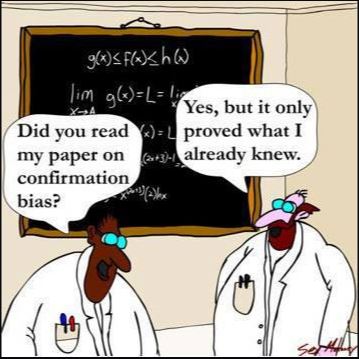 I haveÂ written several pieces over the last year or so sharing my concerns about the ways in which digital media are being exploited to manipulate people and the importance of educators looking for opportunities to raise student awareness of this. Here are a few of these posts:

One reason it can be pretty easy for those who wish to do so to manipulate or influence others is an element of human nature known as confirmation bias.Â I truly believe that making students aware of confirmation bias can open their minds to the realization that other people's opinions (andÂ facts) are essential to the thorough understanding of an idea. Only when we are willing to purposely try and see the â€˜other side' of an argument are we ready to raise our learning to a new level.

“Confirmation bias, also called confirmatory bias or myside bias, is the tendency to search for, interpret, favor, and recall information in a way that confirms one's preexisting beliefs or hypotheses. It is a type of cognitive bias and a systematic error of inductive reasoning. People display this bias when they gather or remember information selectively, or when they interpret it in a biased way. The effect is stronger for emotionally charged issues and for deeply entrenched beliefs.”

Confirmation bias can affect us in small ways, like when a student thinks they already understand something so they are likely to pay less attention. We explored this in this article a few years back: “Do Video Lessons Reinforce Learning, or Just Reinforce Pre-existing (Incorrect) Understanding?”

A far more insidious implication of confirmation bias is the tendency we have to look at the title of a media piece and instantly agree with the perspective we believe the piece reflects. Too often, people will go to the next step and share these pieces via social media (at times without even having explored the content), creating this echo chamber of seeming “grassroots support” for an idea. Here in the U.S. we've been embroiled in the issue of Russian meddling in the 2016 Presidential election (highlighted again recently by President Trump's meeting with Russian leader Vladimir Putin). This is a disturbing story that illustrates the realities of astroturfing and plays on our confirmation bias. It seems that many U.S. voters may very well have fallen victims to their own confirmation bias as they were successfully ‘astroturfed‘ by Russian operatives.

As I wrote recently in this Medium piece, “The Death of the Open Mind“, todayâ€™s caustic media environment is focused far too much on the extremesâ€Šâ€”â€Šweâ€™ve forgotten the importance of seeking out and appreciating other points of view to inform and balance our thinking. A lot of people seem proud of the way they can shout their (often uninformed) perspective from the digital mountain top. “Look! This guy says what I said! I told ya so!”Â Being â€œrightâ€ seems far more important than being informed.

Let's help our students understand this mental mind trap that we are all subject to. Let's help them open their minds and keep them open and responsive, seeking out the wider perspective that will enable to them to navigate the influx of media in a more informed and learned way. In today's digitally-drenched world, this has never been more important.