Exposing the use of Social Media to Spread Alternative Narratives

The other day I published this article, “Peeling Back the Layers to Get to the Truth Behind News Sources“, and promised a follow up piece in which these ideas were applied to a real example. In that post, I mentioned the article, â€œInformation Wars: A Window into the Alternative Media Ecosystemâ€ by Kate Starbird, Asst. Professor of Human Centered Design & Engineering at the University of Wisconsin. Starbird's work provides a thorough look at cycles of social media posts being published in relation to crisis incidents, pushing politically motivated or conspiracy-theory based “alternative narratives” (i.e. not the truth).

The research conducted by Starbird and her students originally examined a wide array of posts and incidents, all basically focused on crisis events and how mass media was used to published alternative versions of what happened and why. After several years exploring this, in 2016 they “completed a systematic study of alternative narratives of mass shooting events, looking specifically at the alternative media ecosystem that generates them and supports their spread.”

From January, 2016 through October of 2016, this research tracked Twitter posts with terms including “shooting”, “shootings”, “gunman”, and “gunmen”. They then examined and identified tweets that referenced alternative narratives … that is, tweets that also contained terms such as â€œfalse flagâ€, â€œhoaxâ€, and â€œcrisis actorâ€. They then created, “a network map of the Internet domains referenced in these tweets. In other words, we wanted to see what websites people cited as they talked about and constructed these alternative narratives, as well as how those different websites were connected.” This analysis was then used to produce a graph reflecting these sources, with “nodes [that] are sized by the overall number of tweets that linked to that domain” (scroll down in the article to see this interesting image).

The analysis yielded 117 total domains: 80 of them belong to â€œalternative mediaâ€ and 27 belonged to mainstream media.

“More than half of the domains in the graph (and more than 80% of the alternative media domains) were cited for content explicitlyÂ supportingÂ the alternative narratives. However, others (especially mainstream media) were cited for factual accounts of the events, and then usedÂ as evidenceÂ by conspiracy theorists as they built these theories. And a few were referenced for theirÂ denialsÂ of these theories.”

Many examples of these types of posts are provided in the article and I strongly suggest that readers look them over (it's a real eye-opener). Here's one such example:

“The tweet below claims that one of the witnesses to the Orlando shooting is an actor and that the shootings were a false flag. This echoes a common theme, which appears across many alternative narratives in our research, that â€œcrisis actorsâ€ are used to stage events. The tweet links to an article in the Toronto Star domain which contains a neutral, factual account of the event.” 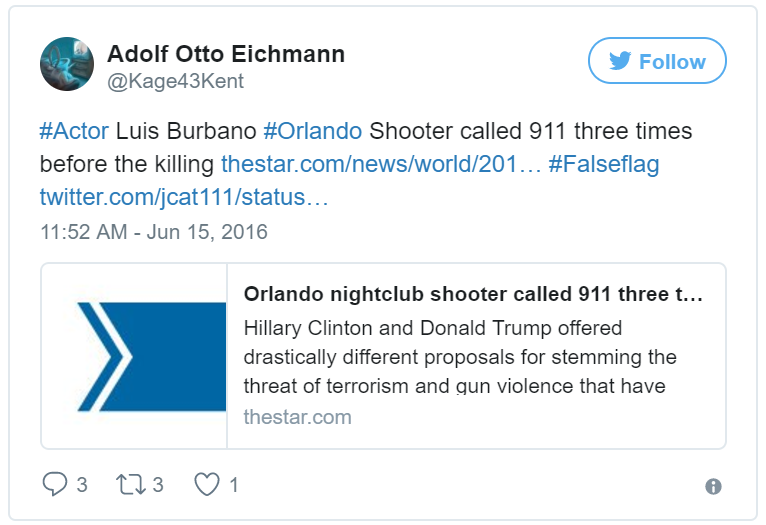 This research also looks at the use of BotNets to automatically post similar content over an extended period of time, seeming to come from multiple resources.

“Closer analysis revealed many of these Twitter accounts to have similar profile descriptions and to use photos stolen from other people online. This is a very sophisticated botnet that seems to be effectively bringing â€œrealâ€ accounts into its friend/following networksâ€Šâ€”â€Šand primarily propagating conspiracy theories and politicized content.”

As I have written from time to time on this site and elsewhere, one of the downsides of the amazing construct that is the Internet and the World Wide Web is the power it gives those with their own agendas to conduct massive misinformation campaigns for little cost.

There is a lot more to this than I have summarized here. It really is a fascinating and illuminating look at how we can readily be duped if we aren't aware of this sort of thing. Again, I strongly suggest that people read this through themselves.

Peeling Back the Layers

Looking at the excellent work that Professor Starbird and her student did, we see that they peeled back the Social Media Layer first. There was no sponsored content involved in this data, but they did likely encounter some re-reported (“recycled”) content as they dug down to the source. What they did here that was particularly enlightening, and is challenging for people to do on a day-to-day basis (even on a small scale), is thoroughly assess the underlying agenda behind this content to reveal a pattern of mis-information. Much thanks to Professor Starbird for the powerful insights her work revealed (I should note that I did yet not seek permission from her to share this work, as I believe my use of these excerpts falls under Fair Use, but I will look for some contact info and reach out). 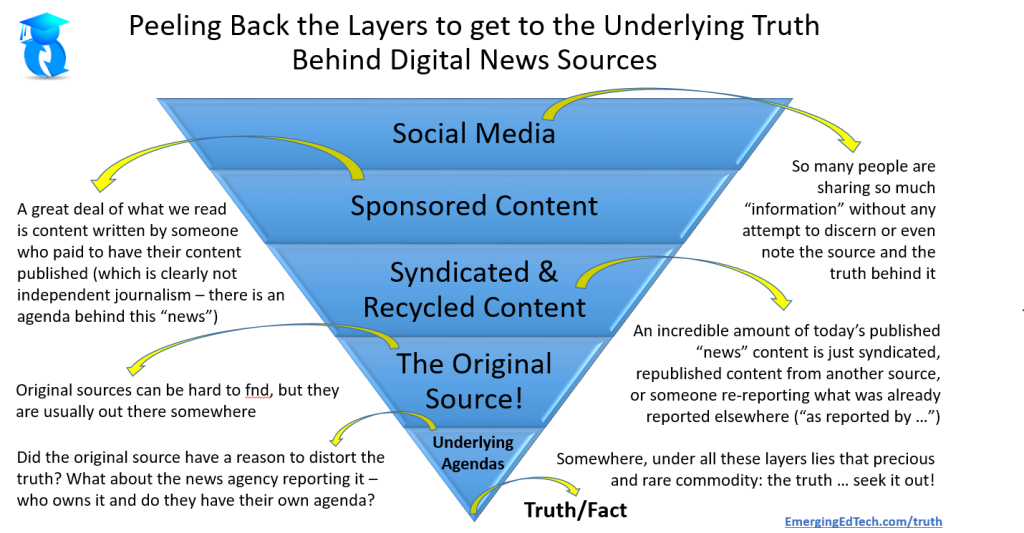 In the meanwhile, keep those “BS” detectors tuned and help your students be aware that there are often many layers between what we see online and the underlying truth or agenda behind it!