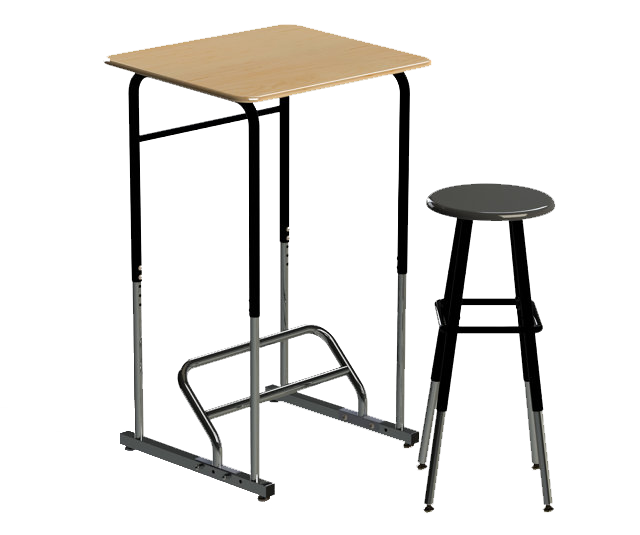 Kids Can Learn Better When They Aren't Always Sitting

If sitting is so bad for adults, then why are we condemning our kids to a life full of it? According to the Small Schools Coalition, the average U.S. student sits about 4.5 hours during an entire school day, but this statistic does not factor in the hours spent sitting doing homework, watching television, and completing basic activities such as eating or going for long car rides.

You think kids are active? They are sitting nearly as much as the average office worker.

Elementary school children spend an average of 943 hours at school â€” and most of that time isn't dedicated to recess.

Are we really setting our children up for success, or for a sedentary lifestyle that also happens to subdue their creativity?

Organizations like StandUp Kids are working to get standing desks in every public school. They want to achieve that milestone in ten years by educating public school administrations on the negative effects of prolonged sitting and the benefits of standing.

Alexandria County Day School is one of the few, innovative schools that began implementing standing desks in their curriculum. Although they only received three for the three different third grade classes in the school, the effects have immensely helped the children control their energy levels and channel it toward their creativity and learning.

The school's head, Scott Baytosh, has been using a standing desk for six years already, CNN reports, and he gladly gave his students the opportunity to reap the benefits of one when the school had extra funds. In an interview with CNN, Baytosh said, â€œKids at this age need to move and so often in education, we tell them to stop moving, sit still, sit up, pay attention. Here we are, allowing them just enough movement to be more comfortable and focus so that they can focus their mental energy on what the lesson is asking them.â€

Standing desks do not necessarily require the student to sit all the time; the standing desk provides students the option to use a stool as well. Mark Benden, an associate professor at the Texas A&M Health Science Center, says that too much sitting can lead to attention deficit disorders and obesity. When children were given the opportunity to use a standing desk, Benden describes a positive response in their behavior and activity levels.

â€œWe quickly realized they [the students] are more active, they are burning more calories, at the standing desks. And theyâ€™re not necessarily standing the whole time,â€ Benden said to KQED News.

Companies like UnSit that make treadmill desks for the grownup market would be happy to see them used in schools as well as workplaces. â€œKids need to move, even more than adults, and the benefits for them are just as strong,â€ said Rob Jacobs, co-founder of UnSit.

So next time you think standing desks are just used by trendy adults, think again. Multiple studies have shown improved performance in creativity, activity, and energy levels within children when they were able to work with one. Although these desks have yet to be a popular trend within public schools, we hope that families and teachers will begin to take a stand in response to the next generation's health.