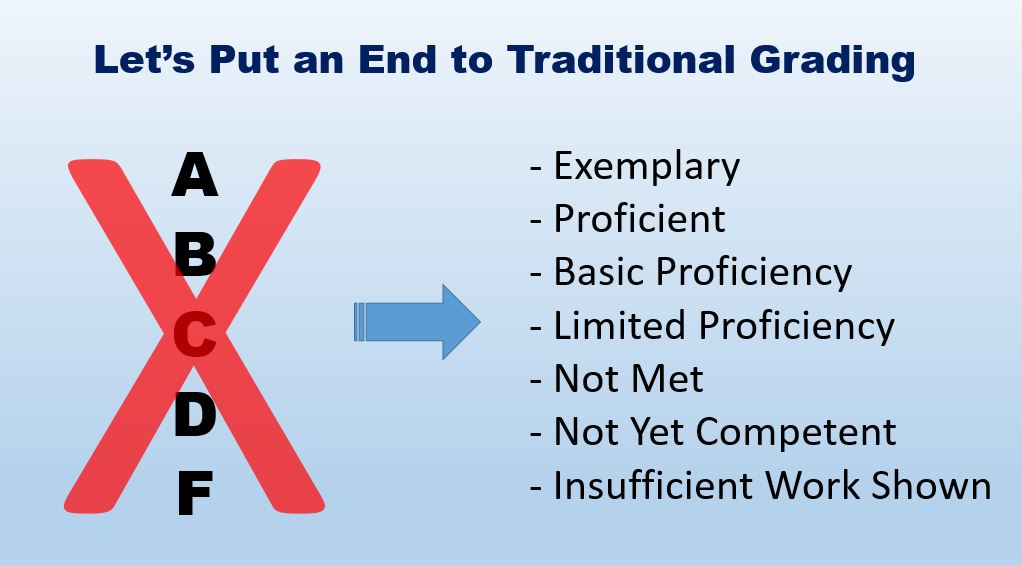 How we Assess Student Learning is Long Overdue for a Change

There has been a lot of hubbub lately about putting an end to traditional grading practices in our schools. SomeÂ ambitious educator(s) even started a Facebook page to petition for an end to grading in their district.

Further exploration of the topic reveals that the idea has been bandied about for quite some time. For example,Â I love the title of this article by Alfie Kohn (published back in 1999!), “From Degrading to De-Grading“.

Reading an article like “No Grades, No Problem: How one High School is Transforming Learning“, it's hard not to think, “Why doesn't assessment always work this way?” AtÂ Sanborn High School, report cards reflect whether or not students have become proficient, or not, in the competencies that each course is designed to teach them. Isn't that the way it should be?

Assigning Grades in a “Gradeless” System

So how do these students get assigned grades, which are expected by colleges for application purposes, and by society in general? It's all about the rubric.

In this type of system, for each competency being taught in a class or course, students are likely to be assigned an Achievement Level (for example, “Not Yet Competent”, “Insufficient Work Shown”, “Basic Proficiency”, “Exemplary”), with the minimum ‘passing' grade being “Basic Proficiency”. As students move through the course, their work on assignments and projects, as well as their overall understanding (assessed in dialogue with teachers) is assessed periodically and assigned an achievement level. By the end of the course, students are to have shown basic proficiency in most or all competencies in order to pass the course and move on.

These final rankings are assigned corresponding “GPA” values so they can be translated to traditional grading. The overall system in use at Sanborn is explained further in this PDF.

The Move to Competency Based Assessment

Those familiar with Competency Based Learning will recognize the approach described above. Every year, more schools are moving to these models and decreasing or eliminating traditional tests and A through F grading systems.Â Some states, like New HampshireÂ andÂ Michigan, even have state-wide initiatives to support competency in High Schools.

Now this isn't to say that CBE and the elimination of traditional grades are the same thing, but they certainly can go hand-in-hand.

Regular EmergingEdTech readers will recall that I am a fan of CBE in higher education. I'm excited to see the relationship between the “no more grades” movement and CBE. It makes a lot of sense.

In the Emerging Information Technologies course I teach at The College of Westchester, I hardly give any tests (just a couple quizzes). Most of the grading is based on WSQ assignments, in class assignments and mini-projects, and a final project (the grading is still traditional, however).

Regardless of whether schools use traditional A – F grading or rubrics and competencies, when schools move to more active learning modes in which students construct and demonstrate their learning, and move away from memorizing facts and tests to assess their learning, education becomes more engaging and meaningful. (Of course, “facts” can be essential to some courses, but even then, there are more active and less active ways to teach and drill on these.)

People have been talking about how education is broken for decades, but many of us are aware that some schools are doing a lot of things right.Â The growing move to end traditional grading practices, and towards increased use of competency based assessments, are both good examples of this. Let's keep the dream alive and continue to explore and push for these next-level approaches to more effective teaching and learning.

So what do you think? Are you in a school or district that is implementing either of these changes? How's it going? If not, do you wish you were?