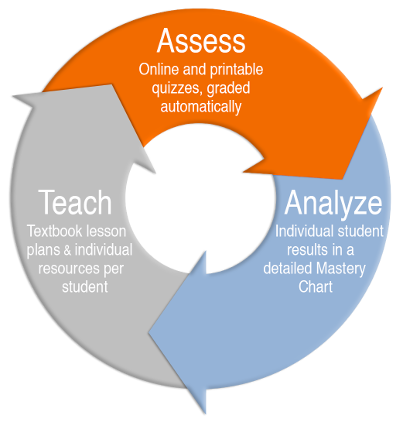 â€œChange the attitude and you change the aptitude.â€ Itâ€™s a teaching philosophy that schoolteacher Tony Sanders firmly holds.

Last year, Sanders taught math and statistics to juniors and seniors with learning differences at Kingsbury Day School in Washington, D.C. Early in the school year, some students were discouraged trying to master new material while others had a lack of confidence that prevented them from even trying. â€œI just canâ€™t do it,â€ they would say. But Sanders knew that once their attitudes about learning changed, their aptitudes would follow. So, along with coaching his students, he used resources from the company where I work, OpenEd (www.opened.com), in two specific ways to achieve this goal.

The first way he used OpenEdâ€”which has the worldâ€™s largest online library of K-12 standards-aligned resources that link assessment to instructionâ€”engaged the entire classroom; the second was tailored to an individual student. Both ways met the specific needs of his special education students, and both achieved remarkable results.

For final exams this spring, Sanders assigned OpenEdâ€™s formative assessments, which are aligned to the Common Core State Standards and Next Generation Science Standards. Once the students completed those, Sanders posted their scores on a Smart Board via OpenEdâ€™s Mastery Chart for everyone in the class to see. Mastery Charts show studentsâ€™ scores, but even more importantly, they make real-time, personalized recommendations for instructional videos and assignments based on studentsâ€™ individual results and learning needs.

â€œI encouraged them to watch the specific videos and do the assignments recommended by OpenEd, and then take the formative assessments again,â€ Sanders said. â€œOnce they finished, their new scores refreshed in real time on the Smart Board. I allowed my students to take the formative assessments as many times as they wanted to improve their scores.â€

As their scores went up, the students were eager to follow the OpenEd recommendations. They retook the formative assessments and then clamored to see their results posted.

One of Sandersâ€™ students who benefited from the approach was Scott (not his real name). Discouraged about leaning, Scott only wanted to do the bare minimum. He figured that once he took the formative assessments Sanders had assigned, he didnâ€™t have to do anything more. His scores were quite low in some areas, however, so Sanders encouraged him to watch the videos OpenEd had recommended for him, and then retake the tests to see how he had improved. And did his attitude change! As Scottâ€™s scores gradually went up, he actually became excited about taking more tests and having his new scores posted on the Smart Board.

Sandersâ€™ experience in this situation tells us two things:

Other teachers who have used OpenEd in the same way have reported similar results. While Sandersâ€™ approach might not work with every group of special education students, there is little doubt that immediate feedback, sharing and coaching can help to improve studentsâ€™ attitudes, aptitudes and, ultimately, achievement.

Some students, however, need a more specialized approach to learning.

Joanna (not her real name) was among Sandersâ€™ 12th grade statistics students last year. Although all of the students in the class had learning differences, Joanna began the year at a particular disadvantage because her math skills were at or below the fifth grade level: Adding and subtracting two-digit numbers posed a challenge for her.

Like all Kingsbury students, Joanna had an individual education plan, or IEP, that spelled out her learning goals for the year. IEPs are tailored to each student, taking into account their particular abilities and learning needs. One of Joannaâ€™s goals for her senior year was to be able to understand word problems that involved making change with moneyâ€”a skill thatâ€™s typically considered a standard skill for elementary school math.

But to succeed in statistics, Joanna would need to have a grasp of advanced math concepts and complicated algebraic manipulation.

â€œYou can imagine our predicament,â€ Sanders recalls. â€œHer ability to grasp the statistics work was going to be hampered by her lack of knowledge in basic math. And I had to figure out how to help Joanna master her math goals while still devoting my class time to teaching her about statistics.â€

Getting Joanna up to speed meant overcoming three practical challenges:

Fortunately, Sanders came up with a solution that took advantage of his schoolâ€™s resources. â€œI hit on the idea of using online learning resources and the privacy of one-to-one technology.â€

Last year, to encourage one-to-one technology in the classroom, Kingsbury issued smartphones to all of its upper school students. That technology, combined with access to OpenEd, was just the platform Sanders needed.

He just needed to pitch the idea to Joanna: She would user her smartphone and OpenEdâ€™s app to work toward her basic math goals, and he would spend extra time with her outside of class. Using the app gave Joanna the opportunity to adjust the grade level of the material she was working on and take short quizzes to assess her own progress. And all of her work was captured online in a Mastery Chart, where she and Sanders could watch her improvement.

â€œThatâ€™s one of the reasons I chose OpenEd: I could develop a personalizedâ€”and privateâ€”teaching system that targeted specific standards just for her,â€ he says. â€œShe and I could work on her IEP math goals together, and she wouldnâ€™t need to feel embarrassed that she was working on elementary school math while her classmates were working on high school math.

â€œI told her it would take some time but Iâ€™d be able to help her along the way because Iâ€™d be giving her the assignments and watching her progress. She actually smiled when we had that conversationâ€”she thought it was going to be a way she could develop her math skills.â€

Even Sanders was impressed with how Joanna immersed herself in the material. â€œOnce or twice, she actually texted me over the weekend to let me know sheâ€™d finished the work and to ask for more.â€

Ultimately, Joanna made enough progress in her class with Sanders and on her overall IEP goals to be accepted into college. It was quite an accomplishment for someone who started the year reluctant to participate in class.

â€œHaving the OpenEd app as a learning and teaching tool was a real asset,â€ Sanders said. â€œI could give her assignments, and she could choose her own level of work to do. And, because her progress was captured by the system, I could see that progress and give her words of encouragement along the way. But more importantly, Joanna benefited from the opportunity to take responsibility for her learning into her own hands.â€

I was thrilled to hear Sandersâ€™ success stories from the Kingsbury Day School. They illustrated yet again how OpenEdâ€™s empowers teachers to motivate an entire classroom or engage one student at a time, and that our platform helps minimize the time they need to spend marking papers while letting them spend more of their energy doing what they do best: teach!