Tablet technology has permanently changed the way people consume and create content. As a result, a number of notable schools are integrating iPads into their curricula. For example, University of Massachusetts Boston implemented an “iPads in the Classroom” program last year, which involved installing iPads in participating classrooms for professors and students to use during lectures and for interactive activities. 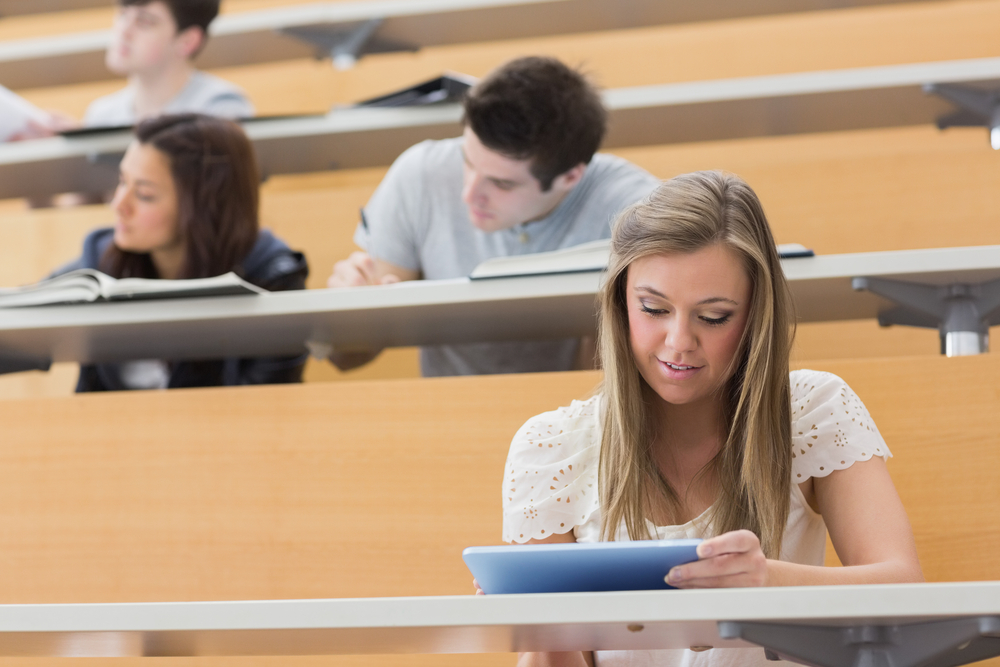 Mary Simone, who manages the iPads in the Classroom initiative, described in UMass Boston News how iPads enhance the university's learning environment. “A music theory class gets to play with a piano keyboard app to practice keys and harmony,” she said. “And a physics professor can use various astronomy apps to pinch and zoom around the night sky, focusing on individual stars, as well as seeing statistics on those stars.”

Innovative classroom apps aren't the only iPad feature generating a lot of excitement in education, however. Interactive iPad textbooks — that is, books that not only contain e-text, but also include videos, quizzes, and other interactive content — have also been garnering a great deal of attention. As the prices of textbooks increase to what many would deem unreasonable levels, large companies like Apple, as well as startups such as Inkling and Metrodigi, are working to change how textbooks are published, distributed and read. According to Wired, Apple's iBookStore is focusing on revolutionizing K-12 textbooks, while the San Francisco based startup Inkling is one of the premier publishers of iPad textbooks for colleges, medical schools and other institutions of higher education. Both Apple and Inkling have formed partnerships with major publishers such as McGraw-Hill and Pearson, two of the largest textbook publishing companies in the country.

Some universities have dived wholeheartedly into wide-scale use of interactive textbooks. For example, according to Sun Sentinel, Lynn University eliminated physical textbooks this year, granting all incoming freshmen an iPad packaged with all the apps and ebooks they would need for their first year. In trying out one of the textbooks on his iPad, freshman Mike Van Casteren said, “The outline of the chapter I was reading was amazing,” he said, “There were graphical designs, interactive videos, slides that you can stop and take notes.”

According to Wired, other examples of universities integrating iPad textbooks into their curricula include Brown University's partnership with Apple iBooks for its Choices Program, and its medical school's biology textbook deal with Inkling. In addition, interactive book startup Metrodigi has formed partnerships with companies like Random House, the Mayo Clinic and CourseSmart.

Public secondary schools are also joining the movement. According to The Denver Post, Denver's Adams 12 school district has given all of its schools access to digital books called Techbooks from a publisher called Discovery Education.

“Techbooks, over the long term, are more cost-effective, especially in science, where you purchase a book and it's almost outdated in a year,” said Kellie Lauth, leader of the district's STEM Launch initiative.

Shara Tibken summarizes these developments in an article for CNET: “A new push has emerged over the past couple years to create content that's not just digital but is also interactive and immersive.” In an interview with CNET, Inkling's CEO Matt MacInnis explained that his company's mission is to create “content you can use,” an objective that is consistent with the general movement towards creating content that enables and even encourages the reader to participate. Whether it be a children's book that lets you move objects around on the page, or a medical textbook that turns a labeled diagram into an impromptu quiz, interactive media is gaining traction both online and off.

However, while developments in the iPad book industry have been generating quite a lot of hype, experts still cite some concerns about its wide-scale implementation. For example, Wired explained how some college professors, including Kathleen Fitzpatrick of Pomona, feel that iPad college textbooks promote an interaction between student and screen, to the detriment of actual student-to-student discussion. Others voice worries that even Apple will not be able to efficiently take on the public school textbook industry, with its many regulations and vast variety of titles. Despite these misgivings, however, the interactive textbooks are here to stay, and will continue to evolve, reshaping education at all levels in the process.

Related Posts (if the above topic is of interest, you might want to check these out):
Flipping the iPad Enabled Classroom (Part 1 of 2)
Come Join us at the Next Teaching and Learning With the iPad Tech Summit!
The Necessity of the Connected Text â€“ Why Just Switching to E-reading Isnâ€™t Enough