With virtual server technology gradually becoming mainstream, the next big leap is the virtual desktop.

Many academic institutions are getting on board with the use of virtual server technology, and I'm proud to say thatÂ The College of Westchester is no exception (more on that in a minute). Right behind the implementation of virtual private servers is the next big leap in virtual computing technologies – the virtual desktop. 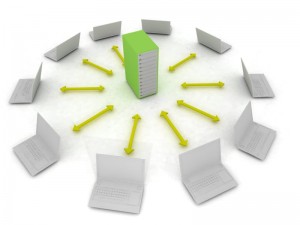 Virtual Desktop technology has been around in various forms for years, but it's only gained mainstream momentum in the businessÂ world in the last few years. Academic institutions tend to lag the business world in adoption of many technologies,Â and that is certainly the case with virtual desktop tech, which is limited but slowly growing in education.

First, Virtual Servers
Many colleges and universities either have already, are currently, or have plans to make the move to some level of virtual server technology. At The College of Westchester, we are just completing the migration of our entire server farm to a consolidated set of servers running VMware software. VMware's virtualizations tools are theÂ leading virtual server technology on the market today (with offerings from Citrix and Microsoft's gradually gaining some ground in recent years).

In our migration, we virtualized about 20 physical servers on 6 new Dell servers designed specifically to host our virtual server environment. Coupled with a new Compellent SAN and higher capacity tape library, we now have a highly redundant environment that is built for growth (we've already got about a half dozen new servers we're going to need to put up in the next few months, whichÂ the new farm will be able to easily accommodate!).

We'veÂ improved on bothÂ server recovery andÂ data recovery capabilities, we're using less space and less energy,Â and we can put up a new server in hours (versus the weeks it took to spec out, procure, rack, and prep a new physical server). I intend to write a post in the near future with further insights into this highly successful project.

The benefits of virtual desktop computing can include the following:

The “Cons”Â ofÂ Virtual Desktop Technology
Of course, like any technology, virtualized desktop tech has its downsides, which I am still learning about. As stated in this Computer World article, “businesses are finding that the benefits of hosted virtual desktop technologies are more nuanced [than the benefits of virtual server tech]. The advantages may be harder to quantify and harder to justify based purely on traditional ROI calculations.”

Following are a few considerations to be aware of:

How About Your School?
Have you gone virtual at your school yet? We'd love to hear about your project or plans. Of course, I'd also welcome input from others who are more familiarÂ with this technology than I am, so feel free to comment and share your insights! Thanks.

Related Posts (if the above topic is of interest, you might want to check these out):
5 Internet Technologies That School Administrators Need To Know About
Virtual Labs â€“ Award Winning Virtual Dissection Apps
Googleâ€™s Liquid Galaxy Project â€“ too cool not to share