Concluding our look at this social learning project with a sampling of student reflections, and curriculum tie-ins.

Last week I published part 1 of this article, introducing this fun and wellÂ executedÂ project, developed by teacher Richard Cossette for his 9th grade advanced ELA students. This week we follow up withÂ a look at some student reflections on the projectÂ and ways in which the project's learning objectives tied in to Saskatchewanâ€™s education curriculum.

Note that the fictional Facebook profile each student created for the historical figure they chose to use can be opened by clicking on the underlined name in the section subheadings below.

ï»¿Student Reflections (with links to profiles)

â€˜Annieâ€™ [Winston Churchill] says:
â€œAt the beginning of this project, I was under the impression that our goal was to learn about different types of government from around the world and about the great world leaders who led these governments.Â  However, when the Summit heated up, it became clear to me that although these tasks were important, the greater knowledge that we gathered from Facebook were the events that we created in our â€˜imaginaryâ€™ society.Â  As we formed alliances, explored each otherâ€™s profiles, expressed our ways of ending poverty and voted, we seemed to be creating our very own utopian society[â€¦]

Winston [Churchill] and I both believe in honesty and fairness to all, which was helpful when deciding how resources should be divided, how the BP oil spill should be resolved and how to eliminate poverty.Â  It was evident during the Forums that most people would give anything to help out their people and, to my delight, most were also willing to compromise to get what they needed.Â  I think the real world could use a heavy dose of these kinds of resolutions.

When it came to vote on World Leader and Best Group, Catherine de Medici and the Autocrats had the most followers.Â  Thanks to the democratic voting system we used and some secret planning, the Autocrats were overthrown in a coalition by the other three parties (The Demo-Reps, Socialists, and Prophetics) who had allied with each other.Â  Even though weâ€™re all just searching for the greater good, it is sometimes hard to agree with either government.Â  Is it fair to gang up on one leader?Â  Or to be granted leadership based on your bloodline?Â  Opinions vary based on where you sit in each argument, nevertheless I think that when these parties combined, more people were having their voices heard in government.Â  Since Winston was elected leader, I favour democracy and I do not think that monarchy is a fair way to gain leadership or a valid way to gain the confidence of your people.

Every nation has its issues, but when everyone is all grouped together, we stumble upon many revolutionary ideas.Â  The Facebook Summit was a fun and out of the ordinary project that encouraged us to do exactly that.Â  Who could have thought that Winston Churchill and his arch nemesis Adolf Hitler would be reunited over the internet, maturely discussing things like the BP oil spill?Â  Now that the project is over, I still find myself wondering if this could happen in the real world.â€

â€˜Grahamâ€™ [Jesus] says:
â€œAs Jesus, my experience in Facebook Summit 2010 was eye-opening.Â  I chose to be Jesus because I thought I could have something to say about the history of the Roman Empire, colonialism, and minority rights[â€¦]Because I thought that most people actually believe the things that Jesus espoused (love thy neighbour, do unto others as you would have them do unto you, etcâ€¦), I expected my beliefs to be more accepted, but now I see why Jesus was crucified.Â  He actually challenged people, questioned them on the difference between what they were saying and what they were doing, and never compromised his beliefs[â€¦]

As Jesus, I didnâ€™t just spout platitudes about what I believed; I acted on them.Â  I was forced to avoid many alliances.Â  People were doing things and agreeing to things that I would not do as Jesus.Â  Originally, I tried to join with people who shared Jesusâ€™ values â€“ Martin Luther King, Buddha, Mandela, etc â€“ but soon realized that their espoused values did not really matter to them.Â  What mattered to them was winning.Â  The approach that most people had to the summit was Machiavellian.Â  For Machiavelliâ€™s prince, image is everything.Â  Machiavelli argues that a prince can easily manipulate his subjects because â€œthe masses are always captivated by appearances, and by the outcome of the thing, and in the world there are only the massesâ€.Â  In their desire for power, my classmates happily disregarded all personal beliefs â€“ their leaderâ€™s and their own â€“ simply spewing the most inoffensive, politically correct lies that they thought would attract votes.â€ 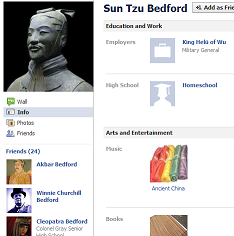 n Tzu] says:
â€œI believe that Facebook is designed perfectly for a project such as the one we did on world leaders, and there are several reasons why.Â  For starters, one does not have to go looking for people and look at them each individually to find if they are interesting or not.Â  The frequent status and activity updates remind you who is there, and how involved they are.Â  If you see that Sun Tzu liked literature, you suddenly know that much more about him, without even having to go and research it.Â  If one is interested in learning more about Sun Tzu, his info is only a profile click away.Â  Perhaps you decide you want to join up with Sun Tzu and want to contact him about it.Â  You could begin a Facebook chat for instant replies, or send a private message if he is not currently online.Â  The Facebook world is all about connecting and sharing information about yourself with others, and what better site to base this project off of.

Over the course of the project, I discovered many things.Â  One thing was that when you bring people from all over the world, all from different times, there is going to be a lot of disagreement.Â  I have reason to believe that Winston Churchill was born and raised quite differently than Queen Nefertiti, and therefore would have differing values and opinions.Â  A wise leader would not see this as something to fight over, but rather a chance to gain knowledge and become a stronger leader.â€

Curriculum connections
Cossette does an excellent jobÂ of tying this intriguing assignment to specific learning goals. Following are just a few of the many specific Saskatchewan CurriculumÂ objectives for ELA Grade 9 met via this project.

Here we have a few of the CurriculumÂ objectives for Social Studies:

My thanks again to Richard Cossette for sharing this wonderful project with us, and thanks to the students who did the work and allowed us share it here!Â

Related Posts (if the above topic is of interest, you might want to check these out):
Facebook Summit 2011, an Excellent Academic Use of the Popular Internet App
Facebook In The Classroom. Seriously.
Do you use Facebook or Twitter in the classroom (or know someone who does)?