How quickly will these devicesÂ permeate our schools as barriers to adoption fall?

The other night in a meeting at my son's high school,Â a science teacher held upÂ an iPad and exclaimed, “this is what they should be using instead of this“, holdingÂ a text book inÂ the other hand. The next day itÂ hit me,Â as if I'd known it along and had just failed to grasp it -Â it'sÂ only a matter of time before computer “tablet” devices displace text books and note-taking devices in our schools. It's hard to imagine a scenario in which this would not eventually be theÂ case. 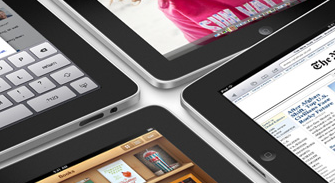 Of course, some of us may remember the first coming of the tablet, which fizzled. There was someÂ excitement over their potential in the earlier 2000's that didn't really pan out. But as the decade drew to a close, Apple's iPadÂ raised the tablet game to a whole new level. ThisÂ year, following close on Apple's heels, a lot of other players are going to try to get their new or updated tablet devices in on the game.

Education technology blogs and forums have no shortage of stories about the iPad and e-readers being adopted in schools, and ways to use them in the classroom. There areÂ even websites named with specific tablet device market leaders in mindÂ (just check out ipadeducators.ning.com, www.ipadinschools.com, or www.edukindle.com).

The trend is strong, as evidenced by this quickly captured list of stories focused on schools adopting or considering the adoption of the iPad as a standard:

What Do You Think?

Even with the growingÂ acceptance of the iPad and other tablet devices in education and business, they still have a long way to go before they achieve mainstream adoption. What do you think stands in the way of this in the educational environment?Â What are the biggest barriers -Â money, standards, awareness?Â How about the main factors in favor of their adoption? And just what might you want from a tablet device as an instructor?Â (Click here to comment. Thanks!).

Related Posts (if the above topic is of interest, you might want to check these out):
5 Internet Technologies That School Administrators Need To Know About
Cool! 3D motion video created by capturing extruded light from an iPad
5 Examples of Improved Approaches to Assessment (from the 2010 NETP draft)

A Teacher’s Guide: How to Secure Your Video Conferences From Non-Participants

Moving on from Standardized Tests to AI: Helping Students and Teachers...