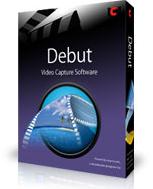 Over the last couple of weeks I've been looking into a variety of free screencasting tools available on the web.

I'm interested in finding a free application that let's me easilyÂ capture screen activity and record audio over it, andÂ then save the resulting file in an easy to play, stand-alone format (some tools only allow created recordings to reside on their web site – I wantÂ more flexibility over how IÂ distribute what I produce).

I started with a look at Jing from Techsmith the week before last, then took a step back and gathered a list of other free apps withÂ similar functionality. After comparing basic functions and features of the many tools in this list, I decided that Debut from NCH Software would be a great app to check out next.

Debut was quick and easy to download, install, and test. I'm impressed with it's capabilities, particularly for a free app. I appreciateÂ the many formats that you can save recorded files in – MP3,Â WMV, MP4, AVI, ASF, 3GP,Â MOV, and FLV.Â  Another important difference between Jing and Debut is that Debut does not limit the length of videos you can record. You can also add a simple caption to your video. You even get to choose from various video and audio encoder options.

Below I've embedded a video I made using Debut Lite (note that itÂ needs to be viewed full screen to really see the details of the screen activity). This video discusses how to use Google Alerts to create an automated Google search that will deliver a preset number of results to your email on a daily or weekly schedule, or “as they happen” (this is a great utility, and probably a blog topic for a future post).

Â
Issues uploading video to YouTube
Preparing this tutorial video was easy, but I experienced difficulties uploading a functional copy of the tutorial to YouTube.

I initially saved my recording inÂ WMV format, but the upload of this file failed repeatedly (I have uploaded WMV filesÂ to YouTube often in the past, and hadÂ no problems). I then took advantage of theÂ free integrated Convert utility that is accessible from within the Debut application and converted the file to MPG format. This uploaded with no problem, but the resulting video was messed upÂ – the video was shortened to under a minuteÂ and the audio wasÂ compressedÂ and played faster than the accompanying video. Ugh. I imagine these issues were related to encoder settings.

Finally, after re-recording and trying various things to resolve the issue, I found that converting my original file to MP4 format worked fine – the resulting uploaded video played as it should.

The paid “Pro” version of Debut
It's always nice when there is a paid version of an application available, to provide additional capabilities. The paid Pro version is $69.95 (I could swear it was $59.95 when I looked last week). Unfortunately, I couldn't find any documentation on the NCH Software web site that explained the differences between the free and paid versions. I was surprised to find this question posed on their online forum, and not answered. If anyone knows more about the differences between the versions, please comment and fill us in.

Next Week
The next step for me is to combine the functionality of Debut with the capabilities of Windows Movie Maker, and confirm that the two of these free tools together provideÂ the flexibility to deliver the results I want.

With Windows Movie Maker, it's easy to organize video clips and images into one continuous video. WMMÂ also lets you do things like control the volume of each clip,Â use a wide variety of effects (toÂ fade one clip out and another in, for example). You canÂ even assemble a video montage and record a separate audio clip to lay over it. I think that these two tools, along with web based video hosting sites like YouTube will give me everything I need to produce and distribute high quality tutorial videos, but I need to walk all the way through the process to confirm this.

Related post(s) (if the above topic is of interest, you might wish to check outÂ â€¦):
Comparing 12 Free Screencasting Tools
Creating brief instructional videos (and more) with Jing
Using Internet story telling tools in education