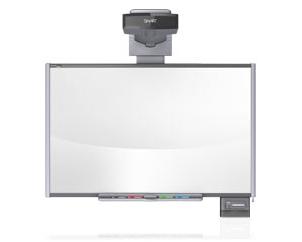 Examining the “State of the SMART(board)” in education.

Back in April, I researched and blogged aboutÂ interactive whiteboard tools that are available as online applications. These areÂ greatÂ tools for the classroom that areÂ quick and easy to implement, and best of all, they are free or low cost. However,Â the functionalityÂ available with theseÂ applications is only a fraction of that provided byÂ many of theÂ installable interactive whiteboard systemsÂ availableÂ today.Â

The academic institution where I oversee Institutional Technology isÂ considering the procurement of interactive whiteboards for use in someÂ classrooms, so it's time for me toÂ learn about popularÂ models and how they are being used in the classroom.

[I realize thatÂ this is a bit of a break from my usual focus on Internet based tools, but not entirely, as thisÂ type of education technologyÂ can easily be used in concert with Internet applications. Let's dig in …]Â

So just what is an “Interactive Whiteboard” (and how are theyÂ usedÂ in the classroom)?
An interactive whiteboard is based on the traditionalÂ whiteboard, but it canÂ act asÂ an input device for a computer, coupled withÂ a projector.Â Things you write and do on the whiteboard can be detected by the computer it is connected to, and when you combine that with the ability to project an image on it, you end up with a huge interactive computer display that can be usedÂ in theÂ classroom as an aid to lecturing, presentations, demonstrations, and more.

ThisÂ educational technologyÂ hasÂ gradually grown in acceptance and popularity since it was introduced in the early 1990's,Â and it continues toÂ gain in both mindshare and market share. The Wikipedia entry for “interactive whiteboard”Â states that this “industry is expected to reach sales of $1 billion worldwide by 2008; one of every seven classrooms in the world will feature an interactive whiteboard by 2011 according to market research by Futuresource Consulting”.Â

PopularÂ Interactive Whiteboards
A little research easily turns up dozens of manufacturers of these products, but the front runner forÂ years has beenÂ Smart Technologies and their “SMART board” product line. In fact,Â this company's name has become synonymous with the product line – the phraseÂ “smart board” is commonly used in place ofÂ the more general “interactive whiteboard”.Â

According to this article, as of Q2 2009, Smart Technologies held over 50% of the market for this product line. The article goes on to state that over “2 million interactive whiteboards and nowÂ installed worldwide, and the product category continues to display strong growth”. OtherÂ players in the market include Promethean, Poly Vision, 3M, Hitachi, and Panasonic.

Features & Functions (SMART Boards – 600 & 600i Series)
It would appear that SMART Technologies isÂ theÂ “800 pound gorilla in the room”, soÂ to better understand today's interactive whiteboards I am going to take a closer look at the features and functionality offered inÂ current SMART boards. Over the comingÂ weeks,Â I willÂ also beÂ exploring otherÂ manufacturer's offerings inÂ cyberspace and on the job,Â and I'll shareÂ important findings here, but it would seem like the SMART board is a great place to start to learn more.

The main interactive whiteboards product linesÂ currently offered byÂ Smart Technologies are the 600 series and theÂ 600i series. A primary difference between the 600i units and the 600 series is the incorporation of a built in projector in the 600i series that projects from a short boom mounted at the top center of the systems (the picture at the start of this post shows a 600i series system – note the projector at the top).Â This approach eliminates the issue of shadows being cast by the presenter and the loss of projection quality due to light streaming through the video projection, and itÂ is better protected from theft.

Based onÂ marketing materials I have reviewed on the SMART Boards site, it looks likeÂ both the 600 and 600i seriesÂ support touch-screen functionality, writing with the proprietary pens, saving sessions in replayable and editableÂ formats,Â the ability to attach audio systems, and more. I want toÂ learn more aboutÂ these features.

Next Week
My next step is toÂ better understand different features/functions, and how other manufacturer's offerings differ – what types of functionality or features do they have thatÂ set them apart from the ubiquitous SMART boards?

I'll be learning more,Â and continuing this series of posts next week. See you then!

Did you know thatÂ there's aÂ new Article PDFs page on EmergingEdTech.com? I'veÂ created PDF file versions of a few of my posts, and will be adding to these regularly.Â These cleaned up article copiesÂ are great for distribution to your colleagues, or keeping as a reference (electronically or on paper).