After spending the last two weeks researching what's going on with the use of Virtual Worlds inÂ education related applications, I came away feeling that Second Life (abbreviated ‘SL' from here forward) is byÂ far the predominant tool in this (and any) Virtual World space. This week, my goal is to sink my teeth into SL,Â see how well it works on my laptop and cable modem, how easy or difficult it is to use, and how useful it may be.

When I first checked SL out a few years ago, the computer I was usingÂ wasÂ a little old and was not maxed out with RAM, and the performance of the environmentÂ was just too slow toÂ use. This led me to think that this (poor performance on computers that are not optimally configured) may have been one of the significant factors behind what seemed to meÂ to beÂ a lagging use of the environment. After all, SL has been around for years, and certainly seems cool and interesting, but of theÂ people I knew using an array of Internet technologies, none were working with SL. This time, on a newer more powerful computer, I was able to easily move around the environment, and it seemed that functionality was more than adequate to allow me to play around and see what the environment had to offer. This page provides System Requirements specifications. It is certainly a widely used tool these days, as each time I logged on there were over 50,000 other people logged on!

Getting started
After creating an account and logging in, I proceeded to search for and ‘teleport' to various worlds, whichÂ was easy to do. It was also pretty easy to move around and change my perspective. I even learned how to fly! By paying attention to the options available on the screen, and trying things out, the basic navigation issue was not terribly challenging. What struck me as more difficult was figuring out how to actually interact and do things. It took a couple hours of playing, and the help of this tutorial I found on YouTube (below) toÂ get the hang of things. One of the difficulties I found with the environment was theÂ lack of a consistent way to tell what a world has to offer. Some worlds (a.k.a. Islands) in SL provide a nice overview, usually on a billboard or sign of some sort, close to where you land when you ‘transport' there, but not all do. It would seem very beneficial to me if there were some standard sort of mechanism, maybe linked to the map, that would make it real easy to know what's available in a given SL world, and make it easy to teleport there (the map tool provides some functionality like this, but it seems a bit short in terms of completeness of functionality and ease of use). [If I'm just missing something here, pleaseÂ comment and point it out! – KW]

Touring a Virtual College Campus
As one example of my wanderings and attempts to work withÂ SL, I traveled to Bryant & Stratton's virtual Campus (which I found by searching for ‘colleges' in the search box in the upper right hand corner of the SL screen).

After transporting to the virtual campus, I saw a “WelcomeÂ To Our Virtual Campus” sign that pointed out 7 different facilities on the campus. I walked over toÂ the Open House building, where I immediately saw a large board labeled “2009 Online Commencement”, with a ‘Start' button, but I could not get it to do anything (even though I followed the instruction to select the ‘Touch' option from the right-click menu). This was kind of typical of some of theÂ frustrating experiences I hadÂ as I came across objects in SLÂ that looked like they were going to do something, but often didn't. It turned outÂ that this object signifiedÂ a live event that had already happened, andÂ there were some arrows near the board that would allow you to scroll through listing of awarded degrees.Â The only reason I discovered that was becauseÂ an avatar approached me and initiated a chat, and this was when SL finally felt like it was coming to life for me. Once I realized where and how to chat interactively, this gentleman (Scott Traylor, Director of Admissions at B&S, who exists inÂ SLÂ asÂ ‘Traylorman Lane') was very helpful and provided some insight into how Bryant & Stratton is using SL to engage prospects with online open houses and virtual tours, and to give existing students across their 15 campuses a chance to interact in a different way.

I spent a little more time strolling around the virtual campus and saw useful information services like kiosks (these typically led to external web pages), and places to apply online or request a brochure.

OtherÂ SL resources for Education
I wasÂ particularly interested in checking out museums and other types of online resources in SL that can be useful to educators. I poked around a little and visited some sites. Being able to see images of paintings or other purely visual media is a certainly a straightforward application of the toolset. Another interesting construct was this rich technology timeline mural (image below), found at the New Venture Hall at The Tech Virtual museum. There is a statement on this mural that says “This mural is an invitation to dialogue about the vision of Dr. Douglas C. Engelbart …”, but it was not obvious to me how to participate in that dialogue (or even if it wasÂ possible to do so). The mural itself contained a great deal of information, and seemed to have been contributed to in some sort of interactive fashion. In any case, it was clear to me that I wanted to further explore sites like this.Â I willÂ continue this post next week and look further into these kinds of resource sites. 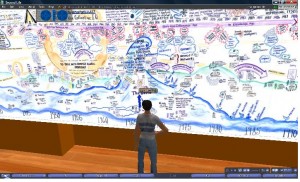 Next?
I look forward to spending a little more time in Second Life, and wrapping up this series of posts next week with furtherÂ insights into SL resources that can be useful to education.

Why Tech in Education Must Become More Accessible

Make Writing Fun for Kids With the Pressto Micro-Journalism Platform