Exploring an emerging twist on an age old educational and professional development practice.

When I ask people what they know about apprenticeships, I get a variety of answers. “Like what electrician's do, right?”, “You mean like an internship?”, “Is that still a thing?”

Despite the varied perceptions of the apprenticeship, it is alive and well. In fact, according to the site apprenticeship.com, from the US Department of Labor:

“Through an apprenticeship program, you can obtain paid, relevant workplace experience while acquiring the skills and credentials that employerâ€™s value. 94% of apprentices who complete an apprenticeship retain employment, with an average annual salary of $70,000.”

And now, thanks to the vision of musician, recording engineer, and mentor Gary Gray, apprenticing is ready for today's digital world! With his pioneering FlyOnTheWallApprentice.com platform, any professional can soon have the ability to apprentice anyone from any where in the world that there is internet access. Additionally, for a small fee, subscribers will be able to watch the process live as it happens (or later via recorded video). This platform is currently being used in the music industry and should be made available to all interested industries in June of 2021.

In this video interview, I discuss the genesis of FlyOnTheWallApprentice.com with Gary Gray and look forward to his plans to expand on the platform in 2021.

It should be noted that while in this video we only see a brief clip of Gary showing us his digital audio workstation as he mixes (and we can hear the pristine audio via the ListenTo plug in, which is a bit of a miracle in and of itself), the apprenticeship process also allows for the turning of the tables to let the apprentice take control and apply what they are learning, with the help of the person doing the apprenticing. And of course, the ‘fly on the wall' gets to see that in action as well!

Gary Gray is an award-winning composer, singer, and songwriter, a voting Member of the Grammy Recording Academy, a producer, a multi-instrumentalist, arranger/orchestrator, and a recording, mixing and mastering engineer. He is the author of “The Home Studio Bible“. Gary is also a very active mentor and a big believer in apprenticeship. Gary spends many hours each week mentoring others in the art and science of music production, including music theory; recording, mixing, and mastering; music licensing; and more.

Gary is also actively apprenticing several musicians, working with some through FlyOnTheWallApprentice.com, and some as interns.

Just to be clear, if you watch the video, you will learn that I am one of Gary's ‘students', being mentored on a weekly basis along with a larger group of students located all across the world. We actually listen to some of my music in the video as Gary demonstrates the process used for FlyOnTheWallApprentice live. 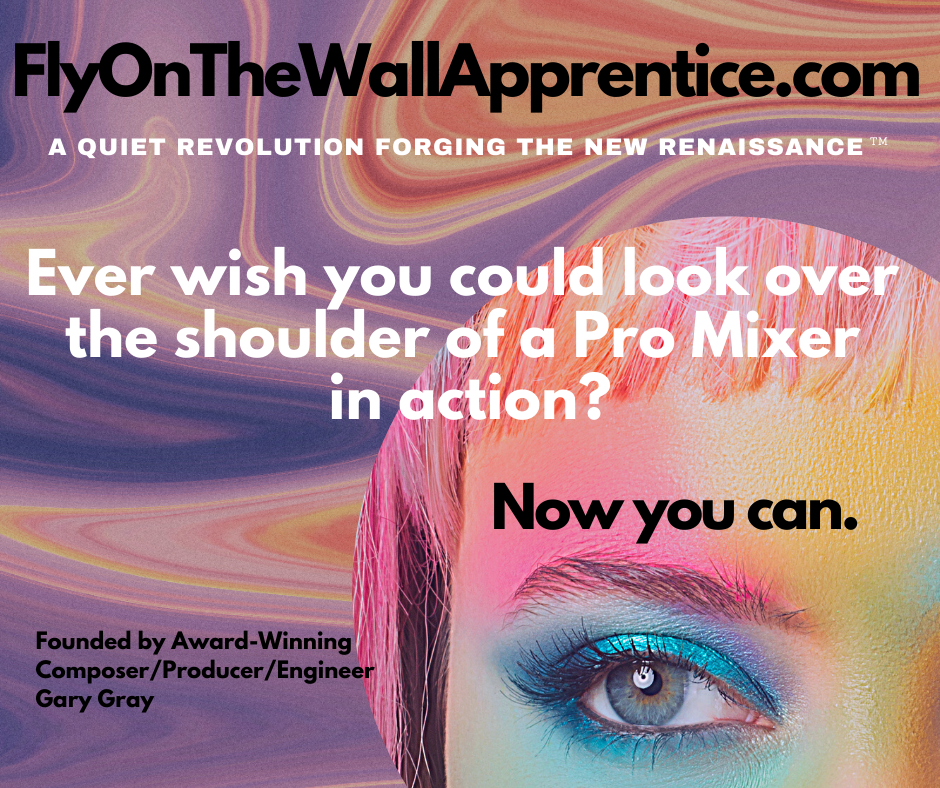 Through technology that Gary has helped to pioneer, people can have the opportunity to be a â€œfly on the wallâ€ so to speak and watch an apprentice teach and work with his or her students. Gary is preparing to make this technology available to others and I thought this would be a great emerging educational technology to discuss and explore and share with the EmergingEdTech audience! Stop by and check out FlyOnTheWallApprentice.com today, and keep an eye and ear out for more news about the site in 2021!