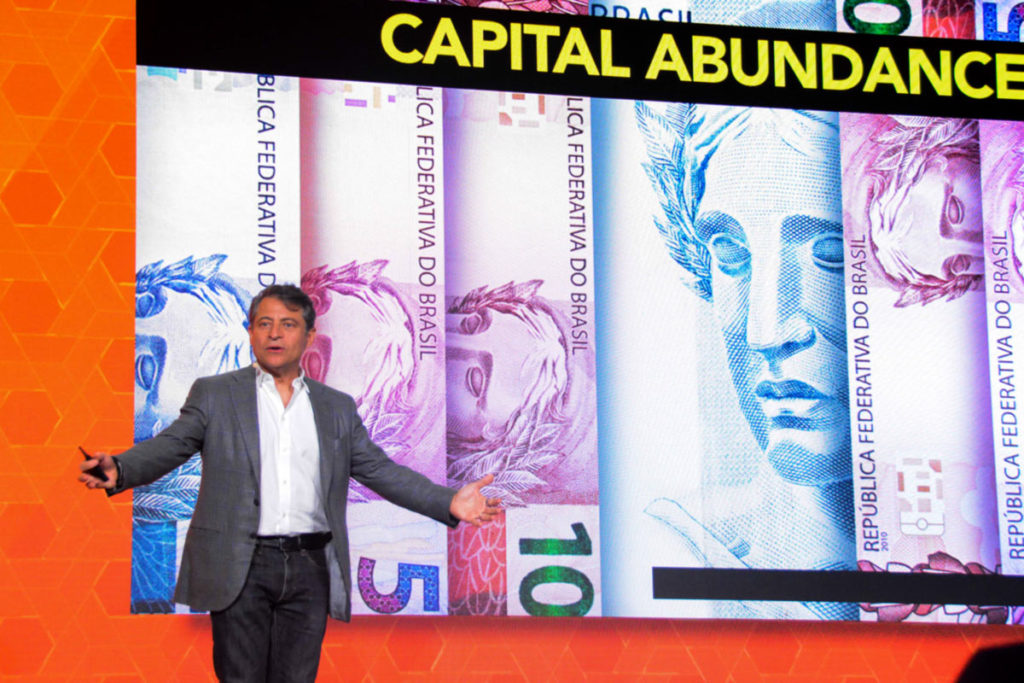 Republished with permission from Singularity Hub, under CC BY-ND 4.0 licensing.

People have no idea how fast the world is changing.

So said Peter Diamandis to the audience at Singularity Universityâ€™s Global Summit, taking place this week in San Francisco. Diamandis believes the convergence of multiple technologies is transforming business models, and theyâ€™re never going back.

For starters, the way businesses are born (in someoneâ€™s garage, at a college dorm, on a computer or smartphone screen) and come to thrive (through digitization that leads to exponential growth), in the 21st century is radically different than the way they used to do so 100 or even 50 years ago.

But business models may be the least of it. Diamandis said, â€œEvery single walk of life is going to change. Not in 20â€“30 years, but this decade.â€ He described the forces he believes are accelerating this rate of change.

Gordon Moore famously predicted, in 1965, that computer chips would double in processing power while halving in cost every 18â€“24 months thereafter. Mooreâ€™s Law turned out to be uncannily accurate, and as a result weâ€™ve seen a massive increase in computing power at ever-decreasing costs. Diamandis asked the audience to consider what kind of computing device they could buy with $1,000 10 years ago as opposed to nowâ€”and to imagine how that difference will translate 10 years down the road, too.

Think about how you spend your time on a day-to-day basis. For a good chunk of it is, youâ€™re likelyÂ  looking at a screen, be it a computer, phone, television, or other device. Another chunk is spent enjoying the company of friends or loved ones, another eating, and so on. These are all pretty standard activities.

But what most of us donâ€™t consider is how dramatically the way humans spend our waking hours has changed over the centuries. â€œWe used to have to forage for firewood, water, and food,â€ Diamandis said. â€œTech begins to liberate us. It gives us a vacation from survival.â€ Stopping into your local grocery to grab ingredients for dinner takes so much less time than hunting or harvesting it. Buying ready-made food thatâ€™s already been heated or refrigerated for you takes even less time.

What weâ€™re doing with all the extra time technology has given us isâ€”you guessed itâ€”inventing more technology. â€œThe amount of time we have to innovate is massively increasing,â€ Diamandis said. Granted, we donâ€™t always choose to use our extra time wiselyâ€”but Diamandisâ€™ optimistic take is that the more time tech frees up for us, the better tech weâ€™ll in turn be able to build.

A lot of extra time may not get you too far (innovation-wise, at least) if you donâ€™t have any money. But the amount of money available to entrepreneurs has skyrocketed, largely thanks to the way that money is raised and the diversity of sources it comes from.

According to Diamandis, thereâ€™s more capital available now than there has been at any other time in human history. Crowdfunding has made it possible for someone in a remote part of the world to reach out to people in cities or other countries and get money to start a business. 2017 saw new records in venture investing in the US, Asia, and Europe. Initial coin offerings (ICOs) raise huge amounts of money in remarkably short amounts of time. State-owned sovereign wealth funds as well as privately-held funds (most notably Softbank CEO Masayoshi Sonâ€™s $100 billion all-tech Vision Fund) are investing globally, often with a heavy focus on technology.

Thanks to digitization and automation, the cost of everything from computing to storage to launching a startup is massively demonetizing. The cost of sequencing a human genome is a perfect (and still shocking) exampleâ€”sequencing the first human genome cost an estimated total of $2.7 billion; now a startup is aiming to do it for $100.

Diamandis himself started a space tourism company called BlastOff! in 1999. â€œOur cost for getting this company startedâ€”for servers, bandwidth, software, everythingâ€”was about five million dollars,â€ he said. Now the cost of starting a business in the US is estimated at $2,000 to $5,000.

Cheap credit means more people are willing to take the financial risk of starting a business, and the tools needed to make those businesses successful cost less, too. Phone calls between different countries used to cost dollars per minuteâ€”now there are multiple ways to make those calls for free. Connectivity is faster and cheaper than itâ€™s ever been. Businesses can advertise for free or cheap on social media and other online platforms.

About half the world is currently connected to the internet. But what about the other half? According to Diamandis, 4.2 billion new minds will be coming online in the next 7 years, and theyâ€™re going to accelerate the future. â€œItâ€™s no longer just Silicon Valley,â€ he said. â€œItâ€™s the world. What are these people going to invent, create, and discover?â€

Google, OneWeb, and SpaceX are all working to blanket the earth in high-speed internet, be it via balloons in the stratosphere or satellite constellations in space.

China plans to deploy 5G by 2020, and some US telecom companies are starting deployment this year. Besides making your phone 100 times faster, 5G will enable functions like remote precision medicine, interconnected networks of driverless vehicles, virtual and augmented reality, and the sensors and actuators that make up the Internet of Things.

â€œThe point is this,â€ Diamandis said. â€œIn 2017 we had half the world connectedâ€”3.8 billion people. By 2022â€“2025, weâ€™re going to see 8 billion people connected, and at a gigabit connection speed, with access to the worldâ€™s information.â€

In the pastâ€”and in many parts of the world, the presentâ€”people with great ideas who lived in small, remote villages often succumbed to their ingenuity being lost. â€œYou could be the smartest person in the village, but you were stuck there,â€ Diamandis said. With no connectivity and no way to share knowledge with the larger world, there wasnâ€™t another option. Increasingly as more of the world gets connected, people have the ability to make their ideas known everywhere on the planet.

And itâ€™s not just people being connected, he addedâ€”their brains may soon be connected too. Companies like Kernel, Neuralink, OpenWater, and BrainGateâ€”among othersâ€”are all working on brain-computer communications technology. Diamandis believes this tech will yield (and preserve) a million-fold more intelligence.

â€œHuman intelligence is going to be the dominant driver in competitiveness in the century ahead,â€ he said.

Itâ€™s generally accepted in the US and elsewhere that once you reach an age somewhere between 60â€“70, itâ€™s time to hang up your boots, sit back, and relaxâ€”for the rest of your life.

But, Diamandis argued, â€œI know a lot of 65- to 70-year-olds who are at the top of their game, and the last thing they want to do is retire. This is when they have the most contacts, the most knowledge, the most wisdom.â€

Diamandis thinks weâ€™ll soon make 100 the new 60, and longevity is at the center of many companiesâ€™ radars, with life-extending tech in the works. Senolytic medicine is working to increase lifespan by selectively killing off aging cells. 3D printing is making slow but steady progress towards being able to print functioning human organs. CRISPR is being used to try to engineer away genetic diseases.

What Is Longevity Escape Velocity?

Longevity escape velocity is defined as the point at which, for every year youâ€™re alive, you can extend your life by more than one year. â€œWeâ€™ll reach that 12 years from now,â€ Diamandis said. Whether or not the theoretical outcomeâ€”living foreverâ€”is actually desirable is another story.

What It All Means? Speed.

To sum it all up, what weâ€™ve got is more people sharing more knowledge, at faster speeds and lower costs, than ever before. If speed has already begotten speed, then, it seems the most likely scenario is this phenomenon experiencing even more growth and acceleration going forward.

So how do we all take part in it? What if things change too fast for us to keep up?

Diamandis is an eternal optimist, and he believes these quicker speeds of change are bringing us an increase in resources to make that change positive.

This article originally appeared on Singularity Hub, a publication of Singularity University.