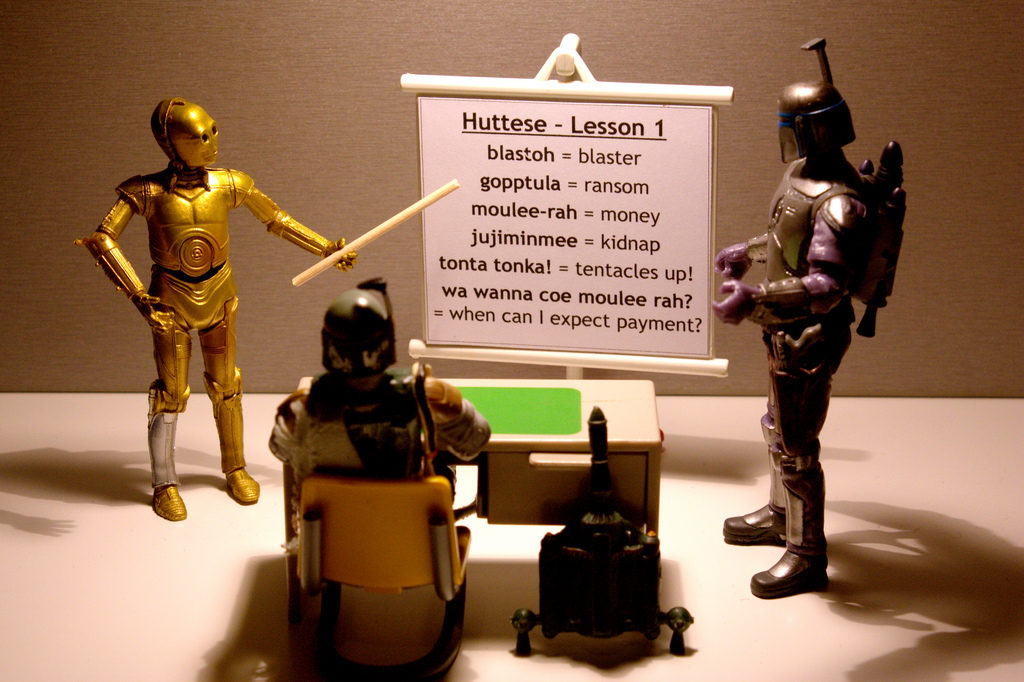 In 1918, Yale professor Charles C. Clarke described the phonograph (later known as the gramophone and, since the 1940s, as the record player) as a â€œtalking machineâ€¦ not worth the trouble it involvesâ€ (p. 116). The unpopularity of Edisonâ€™s invention, which had been around for over 40 years, among foreign language teachers was blamed on the â€œinvincible unnaturalness in the reproduction of speechâ€ (p. 116), the steep learning curve for some teachers and students before operating it, and the cost of obtaining speech records suitable for foreign language instruction. Clarke acknowledged the advantages of the machine in teaching pronunciation, and even explained at length how to best perform phonograph-based drills in the classroom, but concluded â€œthat nothing else should be asked of itâ€ (p. 120).

Each decade since the early 20th century has seen an effort to take advantage of the technical innovations of the time for pedagogical purposes. In the field of foreign language teaching, enthusiastic early adopters have readily implemented each of the â€œnew technologiesâ€ that have revolutionized human communication since the phonograph. There have also been those who invariably react with a scowl when faced with the â€œtroubleâ€ of learning to use a new tool with the potential to improve learning outcomes. This article takes a look at what foreign language professionals have said about the pedagogical uses of new technologies at their time. The purpose is to expose the fact that, regardless of the device and its capabilities, the evolution of instructional technology â€“ at least in language teaching â€“ seems to be framed by a common set of attitudes.

The early 20th century saw the development of radio broadcasting, which quickly made its way into the realm of teaching. Limited by the paper-based nature of correspondence, distance education drastically benefited from the aural experience introduced by the radio waves. In 1934, Bolinger described the success of the University of Wisconsinâ€™s first radio-broadcasted beginning Spanish course. Among the benefits, Bolinger lists many of the attributes that have made distance education remain a viable alternative for foreign languages: increased accessibility, geographical convenience, and great appeal for students who work best independently.

As early as the 1930s, however, the literature warns of the same â€œperilsâ€ that are still brought forth when arguing against transforming face-to-face language courses for fully online delivery. Cabarga described excessively high attrition rates (1937, p. 191), a long-lasting challenge of non-face-to-face instruction in any of its forms (correspondence, radio, television, internet). Seven decades later, researchers had yet to find a set of indicators that predict student attrition in distance learning (Storrings, 2006). Luckily, we seem to have started to realize that students tend to drop out of distance courses for the same reason they enroll: time constraints (Moore & Greenland, 2017). Although time availability can only be solved with technology to a certain degree, many non-traditional learners still feel technology-mediated instruction is the answer to their lack of time for studying. Unrealistic expectations about technology are aggravated by the fact that, to this day, the high drop-out rates are used as evidence of the poor quality of distance programs (Martin & Fox-Koob, 2017). Hopefully, we wonâ€™t have to wait several decades before tech-skeptic researchers and educational decision-makers realize that the challenge is not in the technologies or the quality of the curriculum, but rather in the mismatch between student and learning method. After 100 years, the fact remains that technological advances have improved distance education for those willing and able to invest the time it takes to learn.

Tape recorders, computers and smartphones: The rise and demise of the language lab

A language laboratory is a dedicated space that contains technology (mainly devices that allow the recording and playback of sound for listening and speaking practice) for language learning. Their rapid spread in the 1960s and 1970s was not solely the result of the technological advances of the time, but rather the consequence of increased governmental support for language instruction and the expansion of the Audio Lingual Teaching philosophy (Salaberry, 2001). This teaching method emphasized the role of aural input and oral imitative practice in language acquisition. When listening and repeating were considered the optimal exercises to learn a foreign language, extensive oral drilling â€“ with tape recorders first and computer software later â€“ seemed appropriate.

This technology-mediated practice still found detractors at the time. In a much-criticized report for its methodological shortcomings, Keating (1963) questioned the effectiveness of language labs in supporting language development. Several researchers looked for evidence to counter Keatingâ€™s findings, but it seemed that the differences observed between the control and experimental groups (i.e., learners not using a lab vs those using it) were mostly due to the assessment methods and not the technology itself. Participants who received additional listening and oral drilling practice in a lab setting tended to do better on listening tests, which seems expected. When it came to grammar and vocabulary knowledge, however, their performance was similar to that of the learners in traditional language classrooms (at the time, â€œtraditionalâ€ meant grammar-translation method, which focused on rote memorization of words and grammatical rules).

With the generalization in the 1980s of the Communicative Language Teaching philosophy, which emphasizes interaction over imitation and â€œauthenticâ€ activities (i.e., something that native speakers would actually do with the language), drilling in isolated booths in the language lab became â€œtraditionalâ€ old practice. New computer software developments allowed language lab vendors to promptly adapt to the new teaching trends. While sitting at their individual stations in the lab, students could then hold and record simulated, but â€œauthenticâ€, phone conversations (native speakers do not usually drill uncontextualized sentences, but they do speak on their phones), and instructors had the ability to â€œdrop inâ€ their conversations to provide feedback.

The same technology that allowed language labs to survive the shift in teaching philosophies was responsible for the start of its progressive demise as teaching tools: the generalization of the personal computer brought into question the need for an expensive dedicated space for technology-mediated speaking and listening practice.

The future of the language lab as a valuable teaching aid in speaking instruction is at best uncertain. More than interaction for the sake of interaction, current foreign language teaching ideology emphasizes personally meaningful practice, as well as self-reflection and evaluation. An extension of the capabilities of the personal computer, the unbeatably portable smartphone has lent itself better to this new learning approach than the stationary technology of the traditional language lab. Why would a teacher take their students to a language lab (and go through the process of reserving it, and making sure her students remember the location change for that day) to have simulated phone conversations?

In 2018, almost all students (at least at the high school and college level in the US) carry a smartphone with them at all times. Recording and storing speaking practice with a smartphone (either individual or in dialogues) only requires unlocking a small screen and taping a few times on it.

The latest technological innovation for smartphones, the mobile apps, further accentuate the obsolescence of language labs as speaking practice places. Extempore, for example, a recently developed learning app specifically designed for foreign language educators, is unsettling the industry of technology-mediated speaking practice by offering ease of use and real portability at a fraction of the cost of a traditional lab.

Does this means that language labs will soon go extinct? Not really. If the goal is to allow several students to talk at the same time, record all these interventions, and work with media, mobile apps are to computer-based language labs what tape recorders were for gramophones. Realizing this, many universities have repurposed their language labs for specialized applied linguistics research. For example, a linguist interested in the role of different cognitive processes (attention, memory, etc.) in language learning may need expensive eye-tracking software and equipment. The machines in the language lab are ideal for this crucial aspect of language education: the more we know about how the brain learns, the better we can teach. Once again, technology adapts to serve the learning interests of the time.

What 100 years of technology in foreign language education tell us is: that technology is an ever-present and powerful learning aid, that there will always be change-resistant voices warning against the â€œineffectivenessâ€ of any new developments, and that the success or failure of a particular new tool depends much on the way instructors and students use it to serve their teaching and learning needs.

In 1918, professor Clarke already pointed at the need of sound pedagogy and realistic expectations for technology to be effective: â€œ[The phonograph] teaches only when its master makes it teach, and hence its failure in so large a number of cases of beginners who hope everything from its useâ€ (p. 117). In 2018, the American Council on the Teaching of Foreign Languagesâ€™ states that â€œthe use of technology is not a goal in and of itself; rather technology is one tool that supports language learnersâ€ and that â€œthe development of technology is best driven by the needs of the language learnerâ€ (ACTFL, position statements).

Salaberry, R. (2001). The use of technology for second language learning and teaching: A retrospective. The Modern Language Journal, 85, 39-56.

Storrings, Deborah A. (2006). Attrition in Distance Education: A Meta-Analysis. Proceedings of the 2006 AECT International Convention, 338-348.