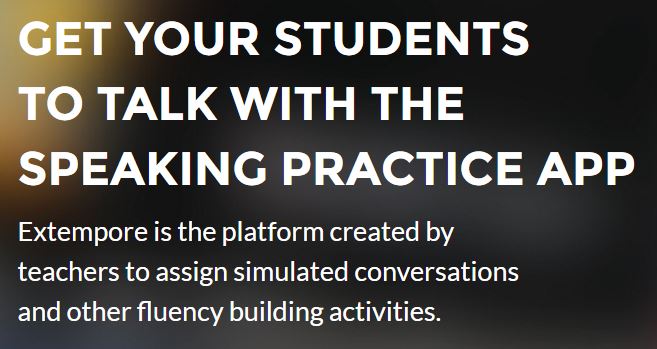 We all have our preferred strategies and our little box of tricks to lower learning anxiety in the classroom. However, despite our best efforts to create a relatively stress-free environment, foreign language instructors may still fail to serve the needs of a particular type of anxious student simply because their type of learning anxiety is not well understood. Individuals acquiring a second language in a classroom setting often experience a specific form of learning apprehension that is easily misinterpreted as low motivation or lack of ability. Because it is a form of what psychologists call context anxiety, foreign language anxiety may be best addressed by altering the context where learning happens rather than trying to alter the way the individual feels about the context. That’s where technology helps.

Communication apprehension is a well-documented cause of foreign language anxiety that affects students’ confidence during spontaneous speaking activities and therefore their chances to practice this skill. These are not necessarily shy or introvert individuals, and they may even excel in other skill areas such as writing or reading. However, their anxiety-related lack of confidence in their own ability inhibits their speaking practice: they may struggle to put sentences together, fail to monitor their errors, or simply stop engaging meaningfully with their conversation partners because they’re too worried about their own performance to listen to what the other has to say. A particularly common symptom of anxiety is task avoidance, which translates into a missed opportunity to practice and improve spontaneous speaking. Once, a student of mine confessed in a survey that she usually let others do the speaking during classroom activities and that she tried to get by with one word answers, just because she was too “shy” to speak in Spanish (her writing ability was excellent, though).

When learners’ unwillingness to fully participate in classroom-based spontaneous speaking activities is related to a form of context anxiety such as foreign language speaking anxiety, our best approach may be to alter the setting in which we ask them to produce spontaneous speech. Rather than making spontaneous speaking practice an exclusively synchronous activity that always happens in front of others (either in the classroom or virtually through video conferencing tools), we can experiment with asynchronous practice where the students interact with imagined interlocutors. Although it may be misjudged as inauthentic or not communicative enough, asynchronous speaking is far from uncommon in the real world. Think of voicemail and self-talk, for example.

Up until relatively recently, assigning asynchronous speaking practice was challenging for foreign language instructors. The development of computer and mobile-based language learning technology, especially the communication tools that have been added to most content management systems (Blackboard, Moodle, Brightspace, etc.) and the apps in the Office suite, has made the task easier. We now have presentational and screencasting tools that allow learners to add speech to visual displays. Smartphones and tablets – almost ubiquitous among our students – make sending voice recordings and videos a very simple task.

So, assigning asynchronous speaking activities makes sense and the technology to do so exists. Why is this not a widespread practice among foreign language teachers? Because we often need to trust students not to script their answers before they record their audio or video assignments. Foreign language instructors are more interested in assessing their students’ ability to speak in the target language in a spontaneous situation, that is, without the possibility to think too much about their answers or writing a script ahead of time. Most of the technology available right now, however, doesn’t prevent students from scripting their responses. Anxious students, in particular, prefer to write first (that’s usually their strength) and then read their response as they record.

Extempore, the Speaking Practice App, is a new tool that addresses precisely this issue with technology-based asynchronous speaking practice. Besides controlling how long students’ responses can be, instructors can also determine how long a student has to read or listen to a question before they have to respond. If the instructor chooses to limit the time to review, once a student opens a question, they may have only a few seconds before Extempore’s recorder pops up, forcing them to start speaking or fail to submit their answer.  This innovative feature has proven an invaluable tool to teachers who wish to encourage authentic spontaneous speech outside of the classroom.

Changing the context of spontaneous communication

In my classes, I often ask students to record weekly voice mails at home for an imaginary exchange student that they have been partnered with. Every time, they need to speak for at least 2 to 3 minutes and they only have 15 to 20 seconds to read the question. These activities have been well-received by both the extroverts and the introverts in my classes, because it forces them to speak without the extra anxiety of the “real” interlocutor.

For me, asynchronous monologic speaking tasks such as the voice mails do not replace classroom interaction. On the contrary, they prepare students precisely for that type of practice. My goal is to diversify my repertoire of tasks for oral development, so that I can also address the learning style of the most self-conscious students. By alternating the context in which spontaneous speaking happens, we’re offering different paths to learning and providing an alternative that benefits everybody.

Disclaimer: Extempore has advertised on EmergingEdTech (this is not a paid placement however – they offered to write a new article, and I liked the piece so I published it. – KW)

Numbers Don’t Lie: Why Microlearning is Better for Your Learners (and...