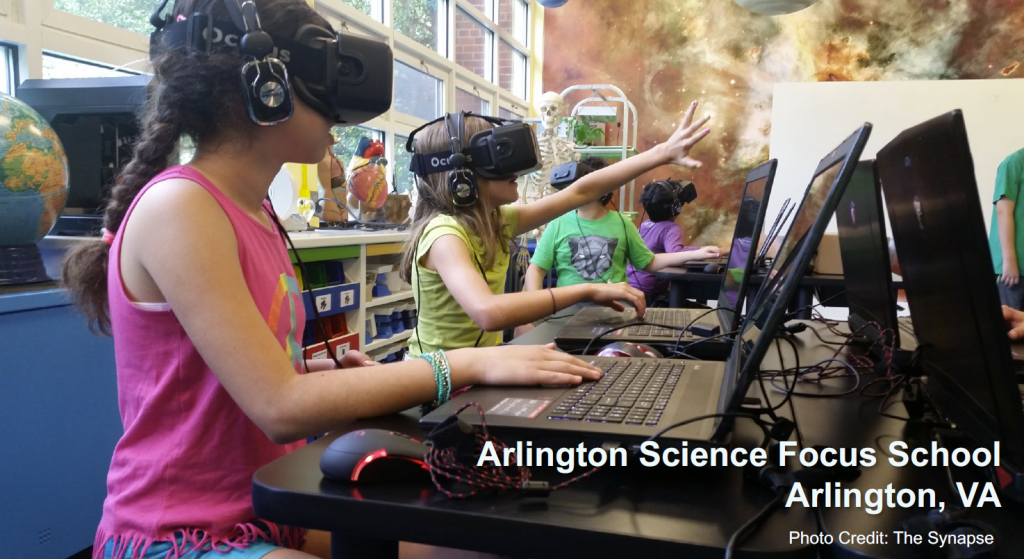 I'm attending UB Tech 2017 as I write this. Over the last few days, I've been enjoying lot of great breakout sessions, some good keynotes, learning about new and evolving offerings from vendors, and of course, meeting new colleagues and networking.

Yesterday I attending a session titled, “Real Applications of Virtual and Augmented Reality in Educationâ€, delivered byÂ Ben Fineman. Fineman is the NET+ Program Manager for Internet2, where he helps to manage Internet2's portfolio of cloud based video, voice, and collaboration solutions. He is a respected topic expert who speaks regularly at various national and international academic conferences.

In his session he focused more on schools using Virtual Reality (versus Augmented) which I thought was great since that's the area where I've really been wondering if and when it might begin to make an impact. AR has already picked up a lot since there are plenty of affordable apps, but VR can be pricey to get into, and good VR comes with heavier technology requirements. But apparently there's a lot going on in the world of education with virtual reality!

Fineman started with an overview of these technologies and some of the key players.

Virtual Reality took what has probably been its biggest step towards public recognition when Facebook bought the Oculus Rift, which had its consumer release in 2016. The Oculus RiftÂ provides High Quality VR for about $500. Another popular high end offering is the HTC Vive, which typically costs a couple hundred dollars more.

On the other end of the spectrum, there is Google CardboardÂ – dirt cheap (as in $10 – $15 or so), but the experience is pretty weak. Nevertheless, many K-12 schools have been using Google Cardboard as an affordable introduction to the world of VR.

Some other offerings include the Gear VR (2015), which also uses the phone, but provides a much better experience than Cardboard, and Playstation X, a proprietary offering that requires you to have a Playstation.Â Windows 10 VR is just starting to ship (or should soon), so that may become another player in the market.

To provide some sense of the scale of sales of these devices, Fineman noted that Gear VR sold 2.3 million units in 2016 vs 355,000 Oculus rift.

Fineman also noted that AR and VR are, “different ends of the same spectrumâ€.

In 2016, theÂ Gartner Hype Cycle, which uses a set of phases to describe the life cycle of new technologies, showed AR falling into the “Trough of Disillusionment”, while Virtual Reality was just climbing out of it. 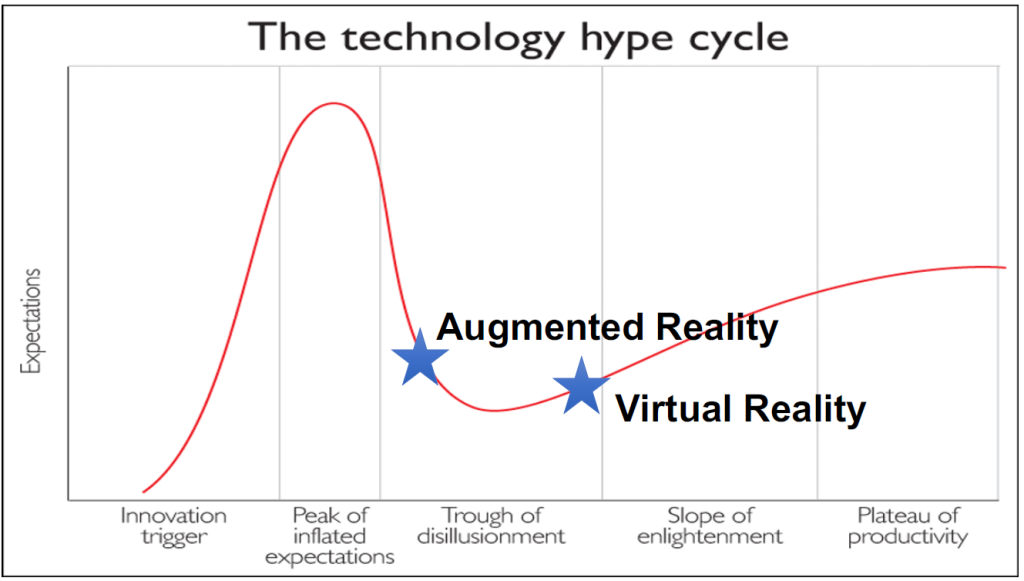 Fineman went on to offer examples of applications and ways that schools are using them, sprinkling in specific examples of schools doing this. If you are interested in VR as an instructional application, there are good examples here.

Virtual campus tours available on the web are being evolved to work on Augmented Reality platforms. A couple popular platforms for this are You Visit and Georama.

The University of Michigan is using VR to let potential football playing studentsÂ experience what it's like to experience being on the field in a full stadium.

While wrapping up his fascinating presentation, Fineman discussed the evolving potential for VR and AR as a collaboration technology using avatars and mapped facial expressions. As another example of the future of AR, he mentioned Microsoft's developing holoportation applications, which can allow people to holographically “teleport” and interact.

Clearly the future of Augmented Reality in education is very exciting and full of potential. We are only at the dawn of this powerful technology – I can't wait to see what is to come!

Fineman suggested that interested people join this Internet2 Metaverse working group to participate in an ongoing dialogue about these evolving technologies: bit.ly/mv-wg.