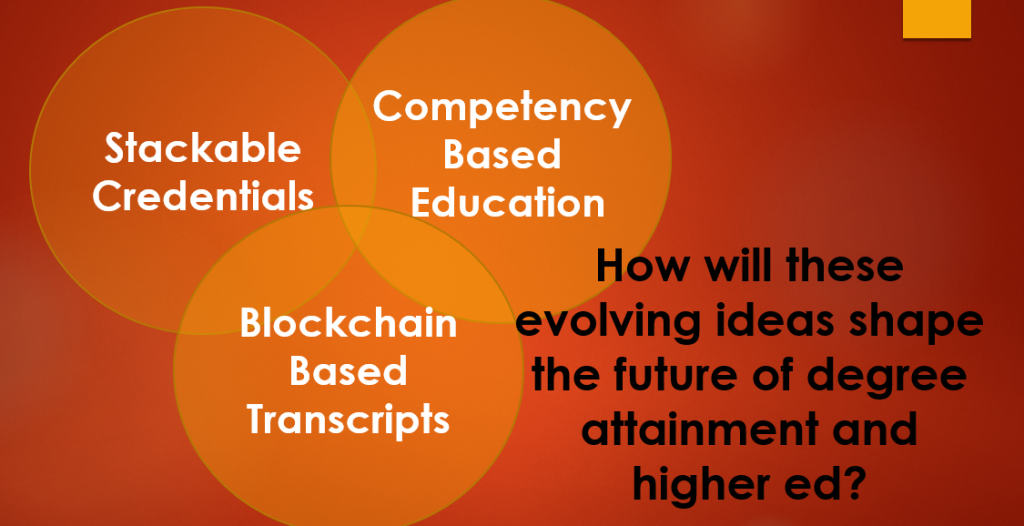 … And Taking it a Step Further, How About the Custom Degree?

It's been a lot of fun these past 8+ years researching, learning, and writing about the ever changing world of “edtech”. It's also been a bit frustrating seeing how slow meaningful changes have been occurring. On the other hand, it seems that quite a few technologies are positioned to overlap and lead to some very significant changes in the coming decade, if not sooner.

One gradually evolving set of constructs that seems positioned to eventually lead to fundamental changes in higher education is the overlap of stackable or micro-credentials (such as digital badges and MOOCs), competency-based learning, and the development of a framework that facilitates the recognition and acceptance of microcredentials.

Credentials smaller than the traditional degree have been around a long time, starting with the many different forms of certificates that are available from colleges and universities. During the current decade, we've seen smaller credentials become increasingly commonplace, with the certified MOOCs and digital badges being two forms of these.

One of the limitations of these micro-credentials is the fact that they are rarely accepted for credit by colleges, but that can change as organizations like the Lumina Foundation push their Connecting Credentials framework forward.

Where Competency Based Education ties into this is within those frameworks, which need to be competency based rather than clock-hour based like the majority of today's degree programs.Â (Shouldn't all learning revolve around learning outcomes and not the amount of time you attended a class and study? But I digress …)

At the same time, schools like the University of Texas are developing ChainScript-based transcript services that can ease the process with which credentials are stored and communicated:

“TEx allows the learnerâ€™s academic record to transfer from a traditional transcript into a blockchain-powered ChainScriptâ„¢ that can be kept by the individual learner. This ChainScriptâ„¢ contains a validated and immutable record of the learnerâ€™s academic and professional accomplishments across multiple institutions and experiences, building a portfolio of accomplishments that includes credits, competencies, micro-certificates, degrees, and other records of achievement.

As frameworks like Connecting Credentials develop, and blockchain-based transcripts become more commonplace, a foundation will be in place that can do much more than just ease the process (and cost) of achieving a degree.

Taking the idea forward another step, it is not hard to envision aÂ higher education world where one can “assemble your own degree”. Wouldn't it be awesome if students could combine areas of experience with purposefully selected educational experiences to earn a degree that revolves around skills and knowledge they are passionate about?

Of course, there's a question regarding how schools would go about naming these degrees. The entire process of getting a degree program validated at the state, regional accreditor, and federal level (in the US) is based on a clear definition of what the degree is, so that's a hurdle that would have to be overcome. Maybe this requires the definition of something like “degree competency blocks” that can recognize skills sets by groups of competencies. For example, if one can earn 30 credits in music composition and theory and 30 credits in programming languages and data structures, perhaps this could lead to am Associate's Degree in “Music Theory and Programming”?

But, “what about employers?”, you ask. Will they hire people with these custom degrees? Why not? In fact, it is not uncommon today for employers to struggle to understand what skills many degrees are supposed to represent. A more granular, competency-based definition of the skills behind degrees and microcredentials could actually be a big improvement. Back to our example above, a company that developed apps related to music composition and education would probably love to hire someone with the above mentionedÂ Music Theory and Programming degree!

Some may say I'm a dreamer (but I'm not the only one! 🙂 ). I look forward to looking back at this post 5 to 10 years down the road and seeing how far we've come.