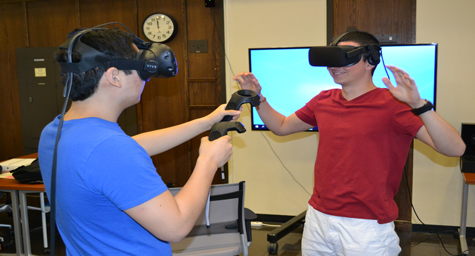 Today's post comes fromÂ Elizabeth Lytle, who works with zSpace (I've written about zSpace here before – a powerful VR based platform for education). While there is likely a bit of bias in Lytle's perspective, the fact is that she makes some good points. I believe VR is far from ripe for widespread classroom adoption (cost and technical complexity being a factor, in addition to the concerns noted below). Some headsets are finding their way into some university labs (like the Emerging Technologies Studio at SUNY Binghamton, shown above), but larger scale use and adoption in K-12 is going to be slow to mature. – KW

VR Headsets May Find a Place in Education, but There are Obstacles to Overcome

The possibilities for virtual reality (VR) for classrooms seem endless. Imagine what students could learn if they could explore the impossible, like the core of the earth or the inside of a cell.

Right now, most people are familiar with VR headset systems which range from the high-end Oculus Rift to the inexpensive Google Cardboard. Itâ€™s not surprising that educators are quickly adopting this technology to learning experiences. They can see the potential, and want to know the impact VR could have on engagement and learning.

However, what many are finding is that headset-based VR systems are too impractical for the classroom, and the way our students learn today.

Learning in Isolation vs. Collaboration

A recent Verizon commercial briefly shows a woman wearing a VR headset, waving her hands in the air exclaiming, â€œHow is this possible?â€ While sheâ€™s having an amazing VR experience, sheâ€™s isolated, and her friends are having a laugh watching her flail around. That type of isolated experience doesnâ€™t lead to learning.

The same thing happens in classroom. When students are using headset technology they canâ€™t see and often canâ€™t hear one another. That means they canâ€™t share their thoughts and opinions, read othersâ€™ facial expressions, or collaborate much at all.

Collaboration is one of the keys to student engagement, helping students learn in a way that really sticks. They work in groups and solve real-world problems. The National Education Association (NEA) says that while individual and even competitive learning activities can and should be used in the classroom, â€œcooperation should play the dominant role.â€

Educators also know that conversations between students and teachers facilitate deeper learning. When students interact together and can react with others about what they are seeing and doing, learning becomes personal and memorable. To be relevant, classroom VR learning experiences canâ€™t isolate learners.

There are always safety concerns when a childâ€™s eyes are covered. A wireless headset, such as Google Cardboard, keeps dangers to a minimum as it at least leaves the ears free. Google Expeditions has been used by millions of students worldwide, and can easily be taken off to Â interact with their peers or investigate something going on in classroom.

However, for more complex systems, not only would students not be able to see or hear their teachers, but they could be physically tied down to a computer. Straps and wires connect their heads to equipment and would hinder studentsâ€™ ability to move, let alone leave. Fire marshals are not going to be big fans.

Bullying or harassment is also a concern. A student who canâ€™t see or hear others is a vulnerable target for those who might want to take advantage, requiring educators to monitor headset activities closely.

Finally, the amazing field-of-view displays in headset VR are new, and there isnâ€™t yet data on the long-term repercussions to eye or brain development for growing kids. The headset makers themselves have warnings that children under 12 or 13 (depending on the manufacturer) should not use the product at all.

Until lasting effects have been proven safe, not even the bravest technology director is going to give headsets like Oculus Rift and HTC Vive a seat in the classroom.

Delivering on the Promise of VR for Learning

For now, it seems as though the best place for headset technologies is at home where they can be used safely for gaming and entertainment.

The good news is that VR technology already exists today that can be used on a screen in the real world. Right now, students are building virtual models of buildings and circuit boards. Theyâ€™re experimenting with gravity and learning about biomechanics by manipulating the joints of the fingers in three dimensions. They can pick up and view virtual microscopic elements of cells, or troubleshoot a broken quadcopter.

Best of all, teachers and students collaborate and experiment in this virtual world together, without covering eyes and ears or putting them at any health or safety risks. In a screen-based VR environment, they build collaboration skills while having magical interactive experiences and becoming engaged in learning in new and exciting ways. That is the promise of VR for learning.