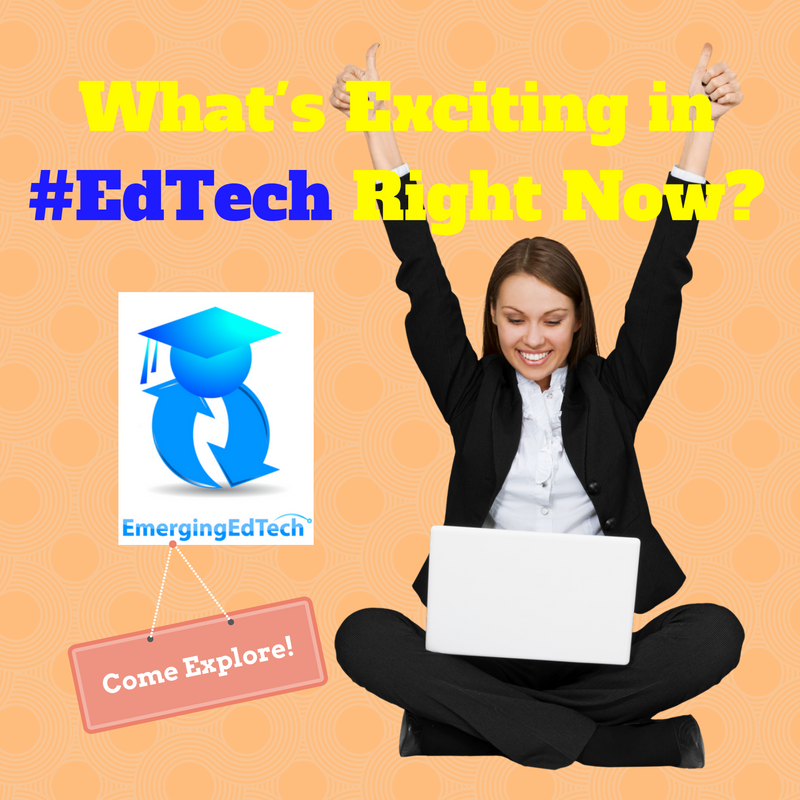 These Technologies are Poised to Make a Difference

I find it fun this time of year to think about how things have evolved since we started the last school year (when I wrote this similarly themed post).

Which technologies have been getting more attention from teachers, and why? And which seemingly promising ideas are slipping into the background?

Here's what I've been observing. Do you agree?

What educational technologies are emerging from the fray and gaining a good deal of much warranted attention these days?

There have been plenty of pundits who have extolled the potential virtues of the digital portfolio in higher education for years now, yet adoption has been far from overwhelming. While higher education has lagged, it appears that some of their brethren in K-12 have leapt! And SeeSaw has led the charge. I've seen so many postings in Twitter about this increasingly popular platform. Not surprisingly, as I write this, SeeSaw has almost 25,000 followers on Twitter, and nearly 10,000 on Facebook. Teachers who are using it really seem to love the platform.

In Higher Ed, eportfolio vendors have dreamed of the day when schools and teachers would realize the potential for digital portfolios as platforms for ongoing assessment. It seems to me that the emerging success of the platform in K-12 is being driven by that use case. Hear what some teachers are saying about itÂ in this video.

Unlike Virtual Reality which seems to me to have a long way to go to move beyond its exciting potential for gamers, Augmented Reality is fully functional and teachers and students have been getting their AR on for a while. In 2014 we wrote aboutÂ Augmented Reality â€“ The Coolest Instructional Technology You Havenâ€™t Heard of, and in 2015 we explored ways that students and teachers have used the technology inÂ 9 Amazing Augmented Reality Apps for Teaching and Learning. I can't wait to do an update on this, as AR continues to gain momentum. For further exploration, check out EdShelf's curated set of AR apps.

There is so much going on right now with Predictive Analytics. Over the years, with the proliferation of systems in our schools, we have built larger and larger storehouses of data about our students, their school work, and related information. Smart folks in the vendor world, and staff right within many of our schools, have begun to realize the potential that data provides to better predict student success, or foresee student challenges that we can work to address before they lead to failure.

We just wrote this article about the work that IO Education is doing with schools to help them bring that data together and put it to use.Â Within our schools, particularly in higher education, people are using tools like Tableau to create interactive dashboards where academic staff charged with facilitating student success can examine data, identify situations requiring action, and consider “what ifs”. We're trialing a new “at risk” dashboard at The College of Westchester, and we're by no means the only school doing so.

If you're an “ed-techie” like me, you've probably been paying attention to 3D Printing for a number of years now. While the shiny and new feeling may be gradually wearing off, the reality of it is that this increasingly affordable andÂ powerful technology is still maturing and moving more towards mainstream adoption. As the “maker movement” in schools has earned a lot of media attention over the last year, it bought further focus to this specific technology.

Last year we wrote a piece sharingÂ 21 Cool Things Teachers and Students Have Built With 3D Printers. If you google “3d printing in education”, you will find seemingly endless content to explore. Many schools have now created Makerspaces that include one or more 3D printers. Speaking of which, my son works in one at SUNY Binghamton and he recently created this awesome 3D version of the EmergingEdTech logo!

I have no doubt we're going to see 3D printing continue to become an increasingly standard technology in our schools.

Here are a couple of technologies that have tremendous promise, but they are still relatively young and at the beginning of their adoption curve.

Digital Badges are a lot more widely used than I think many people are aware, but they have a long way to go to become mainstream. As proof of this momentum,Â this article claims that 1 in 5 Higher Education institutions offer Digital Badges. This article discusses how Badges are “empowering global educators”. This article discusses the use of digital badges in K-12. If digital badges can be connected to the effort to provide pathways for giving more power to micro-credentials (like theÂ Lumina Foundation's â€œConnecting Credentialsâ€ framework), they could get a huge boost.

There is a new breed of smartphone app out there that integrates with Student Information Systems and enablesÂ schools to send personalized messaging and content to students. This is leagues beyond the generic mobile app most higher education have, as it allows for direct communication with individual students. Among the apps making their way into students hands and helping administrators and teachers facilitate student success: Klass App, Connected Campus, and Ooh La La.

Okay, so I'm not saying that SnapChat is poised to become a common component in teaching and learning. But I am saying that the number of educators who have hopped on the Snap wagon is probably a lot bigger than you might imagine. Check out our article,Â Exploring How Educators are Using Snapchat for Teaching and Learning, to learn more (and if you are a Snapchat user, I hope you'll add 'emergingedtech'!).

There's been a lot of buzz around VR over the last year or so, with low end solutions like Google Cardboard and high end platforms like Oculus Rift getting a lot of attention. The fact is, unless you are a gamer, there doesn't seem to be a lot of meaningful, quality VR tools out there yet. Speaking of which, the idea of VR movies seems rather absurd – movies are designed to direct your focus, but VR encourages you to look all around and explore. These ideas are at odds (of course, this will likely get better and maybe futureÂ VR movies can provide multiple different outcomes based on chosen paths, but this sounds a lot more like an advanced video game than a movie). Anyway, VR does have a lot of potential for education, but it is far from ready for prime time.

This is going to change everything. Seriously. Unless you are on the leading edge of certain industries, you are probably largely unaware of Blockchain. The closest most folks get is Bitcoin (a digital technology enabled by Blockchain technology). The “distributed trust” technology based on widely distributed highly encrypted digital ledgers already has the financial industry, insurance industry, and many others scrambling to get ahead of the curve before Blockchain radically disrupts them. Learn more about Blockchain and how it can impact education here.

Yawn … stretch. Other than fitness bands, the ideas envisioned in articles like, Imagining the Classroom of 2016, Empowered by Wearable Technology, just don't seem to be gaining much momentum. Google Glass and the Apple Watch are two of the more notorious flops. The future of wearable tech is on a slow roll at best.

So those are some of the changes I've seen over the last year that I thought were worth writing about. There are plenty of other interesting technologies I wrote about in prior years,Â 12 Emerging Educational Uses of Technology That are the Most Exciting Right Now. Quite a few of these, like Video Collaboration and the new breed of Student Response Systems, are pretty mainstream. Others, like OER and Competency Based Education have a solid foundation but need more time to mature.

So, what did I fail to mention? Are there other promising instructional technologies or tech-enabled educational constructs that have either bubbled up or started to fade away, that you would have expected or liked to see written about here?