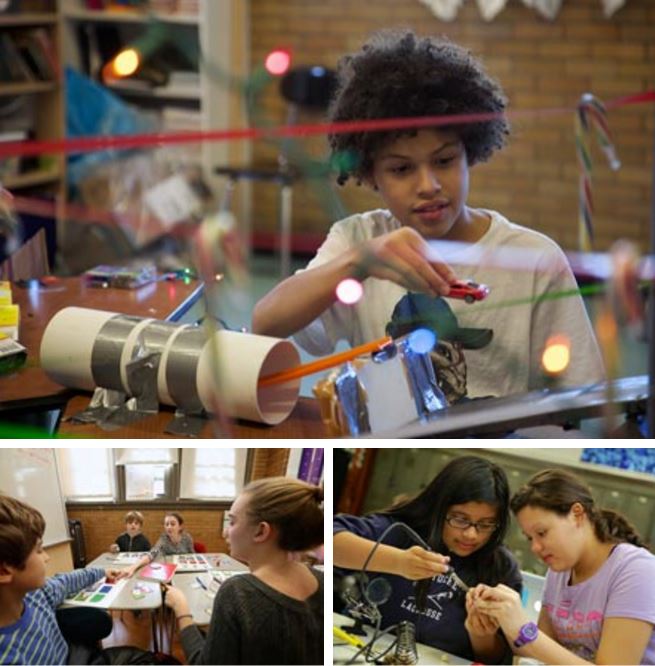 Quest to LearnÂ (a.k.a. Institute of Play) is an Inspiring Example of the Potential for Schools to Succeed With new Models That Make Learning Truly Engaging

If you think that digital games have no place at school, or that it is too early to try them in class, think again. A school based in New York City has already made it come true, integrating digital games in all subjects. Yes, you read it correctly: all of them.

Considering play as one of the best ways to learn has been defended by the greatest minds of child psychology, such as Jean Piaget. However, when it comes to video games, many teachers and scholars are still resistant to it. But here is how this school is challenging it.

The Quest for Digital Games in the Classroom

The school named Quest To Learn opened its doors in 2009 taking children from 6th to 9th grade. In their curriculum, they brought the controversial proposal that digital games would not be just one of multiple available resources, but that they would be used 100% of the time and in all subjects.

For instance, maths and science are taught to sixth-grade students through a gaming experience called â€œThe Way Things Workâ€, in which they help a scientist in a journey through a virtual human body. Another teacher is using Minecraft to build models of cells and tissues.

Staff meetings are also a bit different than usual at Quest to Learn, with game designers and curriculum specialists discussing with teachers any possible difficulties students might be facing, or what needs to be improved. Their meeting room is strategically called â€œMission Labâ€, and they believe that this multidisciplinary brainstorming process helps them to achieve better results.

The attempt to make education more interesting to Millennials (Generation Y) and Generation Z, born with mobiles and tablets in their hands, has been the reason for many current studies. From simple card games to augmented reality apps, researchers are eager to find new models, both more engaging and effective.

Some recent or in-progress projects and studies are:

The Pros and Cons of Digital Games

There is a lot to be discussed and discovered about using digital games in class, and it is normal to see many pros and cons instigating passionate discussions among educators and psychologists. On the positive side, an approach similar to the one defended by Quest to Learn seems to develop a more holistic view of the world (as the subjects are studied in a multidisciplinary way), to increase teamwork collaboration, and to improve visual and auditory abilities along with other skills. For these reasons, the defenders of games in the classroom, also believe that gamification should be used with students of any age.

On the downside, games are accused of increasing unnecessary competition, creating a high expectation of rewards and, maybe, of leaving some students behind â€“ as not everybody happens to be good at playing video games.

And what about literacy? Some might say that writing and reading skills have little to benefit from digital games, but this is not necessarily the case. There are several games specially designed with these skills in mind and available for teachers to try. For example, take the selection offered by Storyjacker: Bamboo, Twisted, and Versus.

Bamboo allows two players to write one story at the same time, while a third one chooses their favorite and writes what happens next; Twisted displays unfinished stories so you can continue them â€“ or start a new one; and Versus lets you write a 100-word story and see how it ranks against others â€“ the decision is made by a third player.

But if you like something a bit more traditional, you probably already know that crosswords, flashcards, and learn-to-read books can all be found in several digital formats nowadays. As it is even the case that writing can improve your health, it is very unlikely that literacy will ever be out of any curriculum, digital or not.

It all sounds like great fun and the possibility to make students more interested in class is very tempting. But, as a teacher, if you wish to introduce digital games to your class, you might want to follow a few steps, so you can achieve your goals properly:

1) Find a game that matches your goals

Except if you have a budget that allows you to create and design your own game, the chances are that you will have to find one already available. So, do your homework, and research some options to see which one suits your needs.

Now that you have short-listed a few games, you have to test them â€“ and it means playing them. If you have no idea of how to do it, look for someone that can, even if it means asking a neighbor to â€œborrowâ€ their 8 year old! This can be a great way to find out how the game really works.

3) Discuss the idea with your school

Now that you have a plan, go to those responsible for making this kind of decision in your school, and discuss your idea with them. Prove your point the best way you can, and be prepared for some resistance if you work for a more conservative institution.

4) Master the game and make arrangements

With the approval in your hands, it is time to master the game yourself or, at least, learn how to play it to your best â€“ otherwise, you might just embarrass yourself in front of the class. Meanwhile, make arrangements regarding any resources you may need, such as booking the IT lab and checking if they have the required equipment for it.

5) Introduce the idea to your class

It is time to break the news to your students. They will probably be very happy about it, but still expect some questions about why you chose this and not that game.

After the class, you can gather some feedback from the students, decide if you think that it was a valuable experience, and if you are willing to do it again.

Clearly, the potential for games as a learning construct is exciting! If you aren't already, you should really consider the possibility of using games in your classroom as an instructional aid. They are proved to make subjects more interesting and engaging, especially among middle-school students.Â Be sure to be thoughtful and methodical as you analyse which games are suitable for your goals, your students, and your school. And have fun!