There are lots of well-tried flashcard apps out there, and you can find some real gems among the lesser known players in the flashcard market. VocApp is one of the many new apps that hope to compete with current leaders in their category (apps like Quizlet, Anki, and Memrise, to name a few). VocApp works on computers and on iOS and Android devices, and it definitely has the potential to be ‘a contender'!

VocApp uses a spaced repetition algorithm. It means that the app remembers your results and shapes the revision schedule accordingly: if you remember how to say â€œdogâ€ in Spanish you can rest easy, as the system is not going to ask you about this word for the next couple of days (or weeks, if you know it really well). On the other hand, if you have trouble remembering a piece of vocabulary, youâ€™re in for some intense revision, as the word will appear in your revision schedule more often.

The app has quite an impressive number of features thanks to which itâ€™s convenient and efficient. Creating flashcards is very easy – you can make your own flashcards after accessing the app, or just copy a list from a spreadsheet file if you have one. 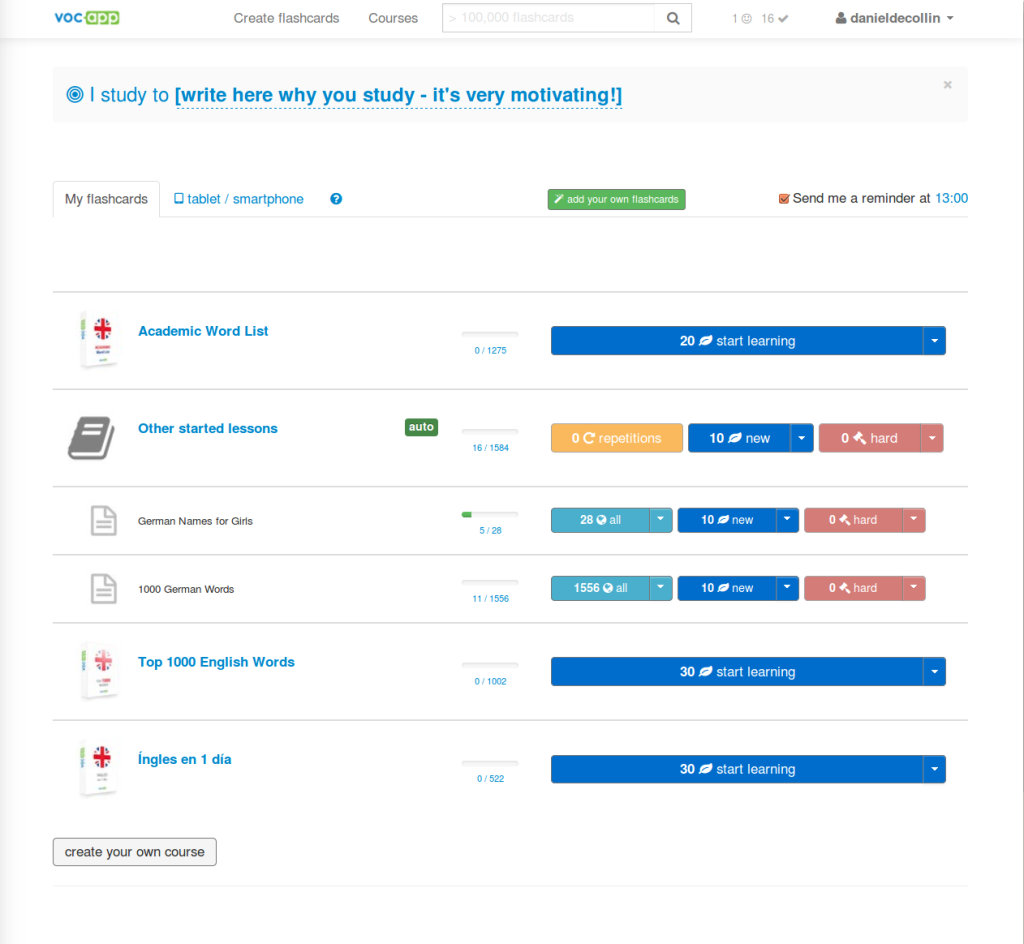 The app can also extract words from longer texts (e.g. newspaper articles, song lyrics) and images and automatically provide translations, pictures and pronunciation recordings. It works with popular languages (Spanish, French, German), as well as with the less frequently studied ones (Catalan, Croatian, Vietnamese and many more). Here is a sample set of German flashcards.

VocApp also offers access to flashcards made by the community of VocApp users. You can just type the phrase youâ€™re interested in in VocAppâ€™s search engine in the upper part of the site and browse through numerous sets.

Do I Have to Pay?

Apart from several ready-made courses, all functionality in VocApp is free of charge, so you can study without spending a penny.

Version for Schools and Tutors

There is also a version of VocApp for schools and tutors, which makes the teacherâ€™s work even easier as he or she has instant access to their studentsâ€™ results. You just have to send a message to the e-mail address given on the website and ask to have a free account opened.

After using VocApp for a couple of days I already know that Iâ€™m going to stick to the app for a while and use it with my students. From the very beginning I really liked its interface and the fact that it handles automatic translation quite well.

For a long time I wanted to do a class on classic rock. The idea was to make students learn vocabulary from various songs from the 1970s and 1980s, which are my favourite periods in the history of popular music. In order to do this, I used the â€œcreate from textâ€ feature. I was satisfied to see that, on average, out of 20 flashcards only 3 required correction of some sort (wrong translation or selected picture). Other than that, the process was simple and quick – creating one set of flashcards took me about 3 minutes (including the time required to make the corrections Iâ€™ve mentioned).

Hereâ€™s one of the several sets I prepared: Pink Floyd – Time.

The studentsâ€™ response varied from being enthusiastic (in those who were already familiar with the bandâ€™s works and appreciated them) to being interested, simply because they were confronted with a new tool which made learning vocabulary less boring and more effective.

It is also important to mention that the students did not have to create separate accounts to use the app. Although it is advisable to log in because then the algorithm records your results and adjusts the revision schedule, you can access other peopleâ€™s flashcards without going through registration and activating your account (which, by the way, is not very lengthy).

I expect my studentsâ€™ enthusiasm to wear off a bit after a couple of weeks of using the app, but Iâ€™m positive theyâ€™re going to keep using it, even if just to review vocabulary before a test.

To sum up, VocApp is not a wonder tool that will do all the work for you, but its smart interface and useful features will definitely make studying easier.