Collaborating with Students, a Teacher Publishes a Novel and Everyone Learns Along the way

My first passion has always been teaching students to think in new ways and to try different things, but Iâ€™ve never been able to shake a close second, creative writing. Iâ€™ve always somehow found time to write during my teaching career (even with three little ones at home), and I got a Masterâ€™s in writing and publishing. But when I found myself with two unpublished novels and eleven yearsâ€™ high school teaching experience, I began to look for ways to put the two together.

Thatâ€™s when inspiration struck. I realized I was teaching my students many of the same â€œreal lifeâ€ scenarios I was going through as I prepared my novel, a comedy about a zombie sheriff, for publication. Why not combine the two? We discuss plot, story, character, and genre in the creative writing club I advise, and the students often talk about their ultimate goal of publishing a novel. What could be more authentic than seeing the publishing process up close? 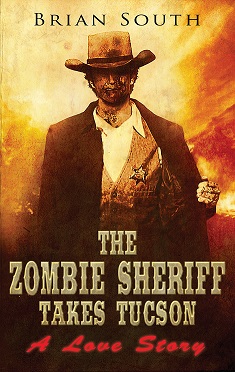 I first started sharing my experiences with students four years ago, when at an open mic night, I put myself out there like so many of my students had done. I shared the beginning of The Zombie Sheriff Takes Tucson: A Love Story (http://briansouth.org/the-zombie-sheriff.html), which at that point was little more than a few chapters.

Who Doesnâ€™t Love a Zombie Sheriff and his Would-be Deputy?

The kids absolutely loved it. At first. The next day, and off and on for the next few weeks one or two of them would come up to me and gush about how they enjoyed the piece I shared, but they wished Iâ€™d written more about a kid zombie named Wilson, who makes an early exit from the story. They were fascinated by hints of Wilsonâ€™s backstory as a youthful zombie, and they didnâ€™t feel he was getting the treatment he deserved. Besides, they said, what better way to characterize the stoic zombie sheriff (who is nameless, a reference to Leoneâ€™s spaghetti Westerns starring Clint Eastwood) than to have him contrasted by an energetic and enthusiastic sidekick?

They were right. It wasnâ€™t hard to seeâ€”or, more to the point, it wasnâ€™t hard for anyone but me to see. They were putting into practice all the characterization strategies Iâ€™d been teaching for so many years. I wasnâ€™t. The sheriff did in fact need to be more three-dimensional. I greatly expanded Wilsonâ€™s role, and the young zombie became the sheriffâ€™s would-be deputy (I wonâ€™t reveal if he manages to become his actual deputy; youâ€™ll have to read the book to find that out).

In my mind as I finished the book, Wilson became a kind of surrogate for what my students have done for me, and what Iâ€™ve tried to do for my students: they make me more three-dimensional, more real, and (as theyâ€™ve told me a little too enthusiastically for comfort) I give them hope that they can one day finish a book-length work and see their name in print.

Beyond providing a dubious role model for my students, I was happy to share with them my experiences in pitching the book to agents and publishers, exploring the world of self-publishing, and trying to decide between going the traditional route or setting out on my own. I showed them how to put together the conventional query letter, which introduces oneâ€™s work, gives a quick bio, and rolls the dice. I showed them databases with agentsâ€™ names, contact info, and genre preferences. And I showed them dozens and dozens of rejection letters.

I was inclined to continue pitching to agents a bit longer, but the students encouraged me to try indie publishing. The more I researched, the more I read that the big-name publishers wanted a slam-dunk and werenâ€™t keen on taking risks, so my odds at being picked up were slim.

Hereâ€™s where I see my endeavor really turning into a teaching toolâ€”I decided to self-publish The Zombie Sheriff so I could use the process to educate my students. I selected CreateSpace and Smashwords, two very popular sites indie publishers use to create print and digital versions of their work, respectively.

As I went through the process, I described to my students how you can hire freelancers (some of which I used for The Zombie Sheriff, some I didnâ€™t) to help you with the things you might not be so good at, like editing, copyediting, formatting, layout, cover design, marketing, and a thousand other things. They were fascinated that there were so many jobs involved in putting together a book and that there were people out there who specialized in each one.

We all Learned Something

The most disorienting thing for me was when I discovered that, after years of teaching students about traditional publishing (the â€œrightâ€ way to get published), I was now, not an expert. I was certainly knowledgeable enough about how to publish oneself, and the students saw this as just as valid as going through the conventional publishing process. To them, there is no â€œtraditionalâ€ publishing anymore.

In the end, we all learned something. My students learned the ins-and-outs of how self-publishing is done at the moment (though what it will look like tomorrow, I havenâ€™t a clue). I learned that an indie author, above all, has to leave pre-conceived notions at the door and get as much input as possible. As one of my students pointed out that it really shouldnâ€™t be called â€œself-publishingâ€ at all, with all the help you can get.

The Zombie Sheriff Takes Tucson: A Love StoryÂ is aÂ comedic horror/Western novel that tells an absurd, tongue-through-cheek tale of reanimated cowboys, undying love, and the lengths to which one zombie will go for justice. And for brains.Â The book is available in both print and digital forms on Amazon, Barnes & Noble, iTunes, and other retailers as of February 20th, 2015.