This book is a must-read for educators everywhere.

In May I wrote this post sharing some of the ideas expressed in the introduction to Salman Khan's recent book The One World Schoolhouse: Education Reimagined. I truly believe that this publication should be required reading for all educators (I even bought a copy for the library at The College of Westchester). There are various themes that arise repeatedly in the book, and many are spoken to with a straightforward eloquence. Today I want to share some of the often simple yet uniformly powerful doctrines offered and verbally illustrated in Parts 1 to 3 of the book. 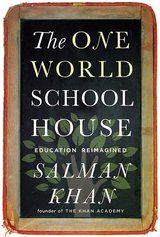 We all learn at different rates, and in different ways
Part 1 ofÂ The One World Schoolhouse: Education Reimagined is titled “Learning to Teach”. In the opening chapter of this section, Khan explains how his cousin Nadia, a clearly bright and capable student, had hit a wall with math. He started tutoring her and this was essentially the genesis of the Khan Academy. In this chapter he discusses the fact that, “People learn at different rates. Some people seem to catch on to things in quick bursts of intuition; others grunt and grind their way towards comprehension. Quicker isn't necessarily smarter and slower definitely isn't dumber.” Educators all know this, yet our existing education system does very little to accommodate this reality.

In the chapter titled, “How Education Happens”, this concept is further discussed at a deeper level, and linked to research. Referencing the work of Nobel Prize-winning neuroscientist Eric Kandel, Khan explains that new synaptic terminals are formed and new neural pathways are built as we learn, creating a web of connections and associations that we think of informally as understanding. This is a very active, and personalized process, and one that is not really embraced by our current educational model.

“Unfortunately, the standard classroom model tends to ignore or even fly in the face of these fundamental biological truths. Stressing passivity over activity is one such misstep. Another, equally important, is the failure of standardized education to maximize the brain's capacity for associative learning.”

“You can standardize curricula, but you can't standardize learning. No two brains are the same; no two pathways through the infinitely subtle web of knowledge are the same. Even the most rigorous standardized tests demonstrate only an approximate grasp of a certain subset of ideas that each student understands in his or her own way. Personal responsibility for learning goes hand in hand with recognition of the uniqueness of each learner.”

” … students should be encouraged, at every stage of the learning process, to adopt an active stance toward their education. They shouldn't just take things in; they should figure things out. This is an extremely valuable habit to inculcate, since in the modern world of work no one tells you what formula to plug in; success lies in the ability to solve problems in novel and creative ways.”

The quote above is excerpted from the chapter “Filling in the Gaps”. Later in this chapter, Khan explains how,

“Portability and self-pacing … are essential aids to active, self-motivated learning. For a student to truly take ownership of his education, however, there's another resource that's required: easy and ongoing access to the lessons that have come before. This is where Internet-based learning offers a huge advantage over textbooks and other conventional materials. Lessons never disappear.”

In “The Leap to a Real Classroom” chapter we learn about the Khan Academy's first structured application in a real classroom, in 2007, and get a glimpse at the power of self-directed learning. A summer program titled Peninsula Bridge running in the Bay Area was mandated to provide educational opportunity to motivated middle-school kids from under-resourced schools and neighborhoods. Peninsula Bridge used the video lessons and Khan Academy software at three of its campuses that summer (the Academy software is a story in itself – perhaps a good topic for a separate article). These Academy resources were used in addition to the standard math curriculum, with the videos being consumed during “computer time”. There were some unexpected results:

“… most of the kids, as expected, rocketed through the early concepts. But some didn't. A few got stuck on things as fundamental as two digit subtraction problems. Some had clearly never learned their multiplication tables. Others were lacking basic skills regarding fractions or division. I stress that these were motivated and intelligent kids. But for whatever reason, the Swiss cheese gaps in their learning had started creeping in at a distressingly early stage, and until those gaps were repaired they had little chance of mastering algebra and beyond.

Â Â  The good news, however is that once identified, those gaps could be repaired, and that when the shaky foundation had been rebuilt, the kids were able to advance quite smoothly.

Â Â  This was in vivid and unexpected contrast to the group that had started at the fifth-grade level. Since they'd begun with such a big head start, I assumed that by the end of the six-week program they would be working on far more advanced concepts than the other group. In fact just the opposite happened. As in the classic story of the tortoise and the hare, the 1+1 group plodded and plodded and eventually passed them right by. Some of the students in the “head start” group, on the other hand, hit a wall and just couldn't seem to progress … presumably because of gaps in earlier concepts. In comparing the performance of the two groups, the conclusion seemed abundantly clear: Nearly all the students needed some degree of remediation, and the time spent on finding and fixing gaps turned out both to save time and deepen learning in the longer term.“

There are many more examples of the power of enabling students to take responsibility for their own learning throughout the book. This last example takes us nicely into another important theme of the book …

Mastery Learning is a far more effective and powerful model than our existing (â€œpass/failâ€) model, and instructional technology makes it easier to implement
In the traditional academic model, the time devoted to learning something is basically fixed. Unfortunately, the time required to comprehend subjects varies from one individual to the next. Nevertheless, students must strive to ‘pass' the tests or other markers that indicate “comprehension” of a subject, and march forward with the rest of the class, or risk falling behind and failing.

The concept of “Mastery Learning” aims for a thorough understanding of a subject as the milestone that allows for progression to a new subject or topic, and it has been around for decades (first coined by Benjamin Bloom in '69/'71). Study after study has shown it to surpass the conventional learning model. A key criticism of Mastery Learning centers on the level of commitment required by the teacher and the difficulty in managing the classroom when each student is following an individual course of learning. Fortunately, technology now exists that can help to offset the issue of managing a Mastery Learning based classroom to a large degree.

One benefit of Mastery Learning is that it helps to avoid the gaps in learning that we see evidenced in the Peninsula Bridge story above.

“I firmly believe the gaps in learning can be repaired, and moreover that they must be repaired if future, more advanced concepts are to be mastered. Subjects evolve one from another; one subject's climax is the starting point for the next. A gap or misconception in a previous subject therefore becomes a stumbling block in the one the follows.”

Furthering the discussion of the down sides of the grading system used to assess learning in most classrooms today,

“Forgive a glass-half-empty sort of viewpoint, but a mark of 75 percent means you are missing fully one-quarter of what you need to know (and that is assuming it is on a rigorous assessment). Would you set out on a long journey in a car that had three tires?”

I can hardly do justice to these ideas and the rich dialogue and vivid perspective Khan offers throughout this book in a short article like this. Hopefully I have at least whet the reader's appetite to learn more and pick up their own copy.

In closing, I wish to emphasize that Khan is not suggesting by any means that technology alone is the answer â€“ we need to change our fundamental approach to teaching in order to take education to the next level and overcome many of the challenges we are faced with (and technology is simply an enabler of some of those changes).

Related Posts (if the above topic is of interest, you might want to check these out):
Book Review â€“ Best Practices for Teaching with Emerging Technologies
8 Great Reasons to Flip Your Classroom (and 4 of the Wrong Reasons), from Bergmann and Sams
Salman Khanâ€™s Inspiring One World Schoolhouse