Okay, let's getÂ this out of the way first – this is a vendor sponsored study. However, while I am noÂ expertÂ on the conduct of studies, when I look over the publishedÂ study, it looks quite rigorous to me. These study results make a solid case for the potential benefitsÂ of using this app in an educational context.

Questions being investigated in the study
Researchers went into this effort with the goal of seeking answers, usingÂ validÂ study methodologies,Â to these threeÂ questions:

Some notes about methodology
Study participants consisted ofÂ 122 fifth graders enrolled in two schools in southern California. Following is a table from the study that provides a summary overview of the student groups that participated. 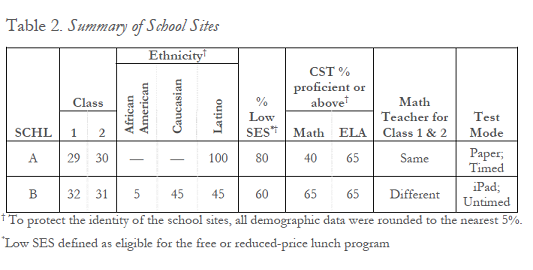 The study used a â€œrepeated measures crossoverâ€ design. At each school, one class was randomly assigned to either Motion MathÂ or regular instruction for the first week. In week two, the order switched. All participants took the test three times (at the start, midpoint, and end of the study period).

Participating teachers at both schools refrained from teaching topics directly related to fractions during the study period, since the purpose of the study was to determine whether the game is effective as a stand-alone instructional tool,not to compare game play to classroom instruction.

Thorough coverage of the methodologies and procedures used in the study and availableÂ in the report.

These study resultsÂ are quite encouraging – I onlyÂ wish more vendors (and independent analysts) would sponsor studies like this. So many teachers and technologists are confident that tech tools like the iPad can add an element of engagement and fun to instruction, and raise the bar on outcomes, but empirical evidence like this makes the case clear cut. Thanks to the folks at GamesDesk for sharing the study with us!

Related Posts (if the above topic is of interest, you might want to check these out):
Collecting studies focused on the impact of Education Technologies
iPads In Education â€“ Howâ€™s It Going So Far?
Succeeding With Reverse Instruction â€“ One Instructorâ€™s Inspired Approach