Last night I received an email about an iPad app that provides a cool intuitive environment for dynamically exploring geometry, and it's free for the next few weeks. Sounded like it might be worth checking out, so I hopped on the iPad, downloaded it, and took it for a ride. Sketchpad Explorer ﻿is fun!

In moments I was seeing visual representations of geometric fundamentals like the Pythagorean Theorem in a way I had never seen (and I've seen some math – my B.S. is in Mathematics). I was dragging shapes around and watching relationships unfold in a whole new way, and was even able to select my own image for a shape, which is the kind of thing that can make iPad apps extra engaging. 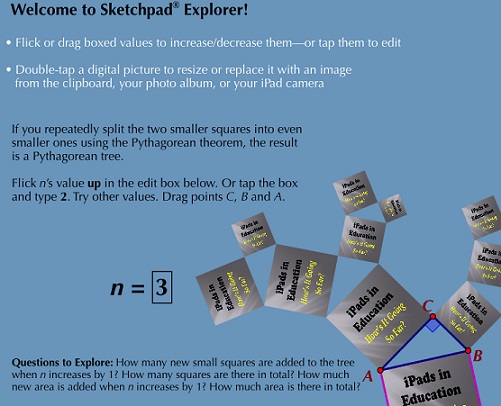 Claiming the title of “the most widely-used learning tool for mathematics education in the world”, the Geometer's Sketchpad offers a visual and kinesthetic way to get involved in learning math. Students can create mathematical models in various ways, exploring principles and illustrating concepts.

If you're an educator with an iPad, take a few minutes to download Sketchpad Explorer and play around a little today just for the fun of it (before they start charging for it)!

Related Posts (if the above topic is of interest, you might want to check these out):
iPads In Education – How’s It Going So Far?
10 Excellent iPad Applications for Teachers
StickPick – An individualized learning app for the iPad and iPhone that leverages Bloom’s Taxonomy

Numbers Don’t Lie: Why Microlearning is Better for Your Learners (and...