1 POSTS 0 COMMENTS
https://glowforge.com
Dan Shapiro is the CEO and cofounder of Glowforge, the iconic 3D laser printer. He is also the author of Hot Seat: The Startup CEO Guidebook, published by O'Reilly. Before founding Glowforge, Dan launched the bestselling boardgame in Kickstarter history, Robot Turtles, a game that teaches programming fundamentals to preschoolers. Before his detour as a boardgame designer, Dan served as CEO of Google Comparison, Inc, a Google subsidiary. Shapiro landed at Google when they bought his previous company, comparison shopping website Sparkbuy. He has been awarded a dozen US patents, and received his B.S. in Engineering from Harvey Mudd College. 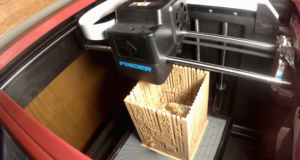 Desktop Laser 3D or Traditional 3D Printer – What Does Your...