The Digital White Board Became a Fixture in Many K-12 Classrooms in the First Decade of the new Century, but are They Still Relevant Today?

Digital whiteboards have been a part of education for well over a decade now. When they were first introduced, these large, interactive displays allowed teachers to deliver — and their students to interact with — content in a completely new way. As tablets and other portable technologies became more sophisticated and affordable, however, some edutech experts began to question whether the digital whiteboard revolution was over before it really began. If today's digital whiteboard market is any indication, those fears were for nought.

In 2012, Danny Nicholson, author of The Whiteboard Blog, told Education Week that there is still a place for interactive whiteboards in the classroom. Instead of quietly phasing themselves out of the market, manufacturers adapted. They began to design whiteboards with sleek new features, like multi-user functionality and a better finger-to-screen experience. By 2013, a MarketResearch.com report projected that the global interactive whiteboard market would grow by nearly 7 percent between 2012 and 2016, thanks primarily to increasing demand for dynamic, interactive learning. 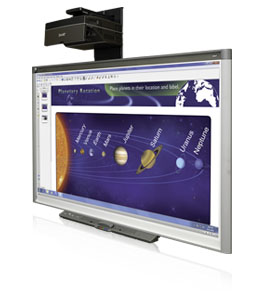 Of course, some brands are faring better than others. Lets review some of the leaders in the interactive whiteboard sphere.

Leaders of the pack: Top brands and products

Which manufacturers are leading the charge, and how? The following represent three of the most popular digital whiteboard brands, as reported by Market Research, Education Week and Scholastic.

SMART Technologies introduced its first SMART board in 1991, and quickly became what many experts consider the single biggest force in the digital whiteboard sphere. Market Research confirms that SMART continues to hold the largest market share. Edutech consultant Pegeen Wright, author of the 2009 “K-12 Publisher's Guide to Interactive Whiteboards,” told Education Week that part of the brand's continued popularity is driven by its legacy — early-adopting schools purchased the SMART board and stuck with what they knew — but also by its reputation for reliability.

“It's sturdy, holds up well, and has lots of software,” said Wright. “It's almost like buying the Honda in the old days. People say, ‘You can't go wrong on the SMART Board.'”

Key Products. SMART Boards come in a range of models designed specifically for classroom use. Its 885ix series is among its most sophisticated, and according to Scholastic, one of the most highly-rated digital whiteboards available. The 885iX series is known for its responsiveness to both pens and fingers, its quick start up and shut down, and its intuitive software. It is also equipped with tracking cameras that recognize and respond to simple hand gestures, like “cleaning” the board in a single swipe. It is, however, a relatively expensive model, which can be problematic in budget-tightening districts or colleges. Thankfully SMART Technologies maintains a full line of whiteboards, including much more affordable models. You can compare them easily on the Smart Technologies website at smarttech.com.

Though Market Research confirms that SMART Technologies controls most of the educational market for interactive whiteboards, Wright told Education Week that Promethean (promethianworld.com) has earned a reputation for being one of the most innovative manufacturers. Its ActivBoards line takes a whole-system approach that blends whiteboards with other personal technologies, like tablets.

“Connecting the front of the class to the back of the class is what we're going for,” Jim Marshall, president of Promethean's North American division, told Education Week. “We have a number of the central ingredients, but assembling the piece parts and putting the efforts around the integration, … it's moving at the same time you're chasing it.”

Key Products. The ActiveBoard 500 Pro is currently Promethean's most advanced interactive whiteboard system, offering what the company calls intuitive multi-touch,multi-user functionalities accommodating up to four students at a time. Its close cousin, the ActiveBoard 300 Pro, allows for two simultaneous users, but does not respond to touch. The ActiveBoard 100 and ActiveBoard Touch are solid, entry-level systems ideal for schools with limited budgets.

MIMIO (Mimio.com) holds a comparatively slight share of the interactive whiteboard market, but Education Week notes it is quickly earning a reputation for flexibility and affordability. Wright notes that the Mimio-Board is portable and low-cost, and its software intuitive, making it a solid choice for “schools that really want to get into whiteboards” without making a huge financial investment.

Key Products. The MimioTeach Interactive Whiteboard is a solid example of MIMIO's knack for making edutech more affordable through innovation. This small device is actually placed on traditional, old-fashioned dry erase boards, converting them into full-featured interactive whiteboards for what MIMIO calls a fraction of the cost of conventional, fixed whiteboards. The device comes with the award-winning MimioStudio software already installed. Educators looking for a full-featured interactive whiteboard can look to the MimioBoard, which, according to MIMIO, remains affordable despite being decidedly high-tech.

Related Posts (if the above topic is of interest, you might want to check these out):
6 Free Online Collaborative Interactive White Boards â€“ 2012 Update
Apple TV In The Classroom â€“ The New Smart Board
The Eno Interactive Whiteboard â€“ A Teacherâ€™s First Glimpse