While an administrator at a rural secondary school district in America, with the poverty level at about 65% free and reduced lunch (an indicator of the level of poverty in the United States school systems), I observed teachers who implemented a flipped classroom with materials they designed and created.Â  Over 250 video podcasts were made district-wide to provide content instruction.Â  Visiting the classrooms of teachers who had flipped their classes, I saw groups of students working together on real world problems, reviewing or being re-taught as needed, and students who were well ahead of the others in their classes regarding the content they had acquired.

Out of the 20 students in the flipped learning class, 4 students did not cover the same amount of content as did those students in the lecture delivery model.Â  These students were given a mark of â€˜Incompleteâ€™ for the term and were required to complete the minimum amount of work that had been determined by the teacher.Â  These students were targeted by the teacher during the next term to improve their completion rate.Â  This non-completion rate in a specified amount of time may provide evidence for the studentâ€™s behavior towards this model and the â€˜depth versus breadthâ€™ concern.Â  It should be noted that the students who had not completed the material in the â€˜required timeâ€™ did eventually finish.Â  The term grade differential for the majority of the class would seem to reinforce the argument that the flipped classroom model seemed to allow for deeper understanding of topics but not necessarily coverage of all topics for all students.

A similar research study was done at the college level.Â  In the magazine, The Economist Â (The Economist, 2011), it was reported that a paper had recently been published in â€œScience.â€ A professor at the University of British Columbia, Louis Deslauriers,Â  studied 850 undergraduate science students taking a required physics course.

At the beginning of the term, students were placed in two groups.Â  Both groups for the first 11 weeks of the course received instruction in the typical lecture delivery format by competent and well regarded instructors. At the 12 week mark, students in group 1 received instruction in a flipped classroom manner.Â  Class time was spent on problem solving and discussion and content acquisition was left to be done by the student outside of the classroom with reading assignments.Â  This delivery method was called â€œdeliberate practiceâ€ in the article rather than a â€œflipped classroom,â€ but the similarities are striking. 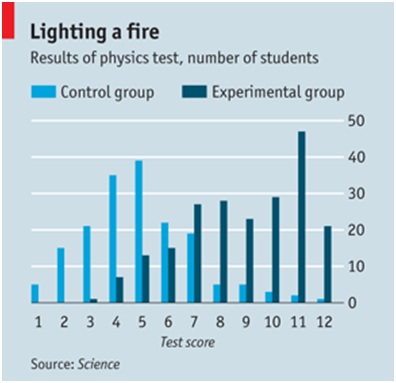 Students in group 2 continued in the typical lecture delivery format for the 12th week.Â  At the end of the 12th week, all students were given a test to determine their acquisition of content for the 12 week period.

According to Dr. Deslauriers and his team, their result is the, “biggest performance boost ever documented in educational research, making the new teaching style more effective even than personal, one-to-one tuition(sic)â€”although measuring the effect immediately after the experiment, rather than waiting for end-of-term exam results (as other research often has), may have inflated the number somewhat.Â  Attendance in the experimental group rose by 20% over the course of the week that deliberate practice was used, and three-quarters of the group 1 members said that they would have learned more had the entire course been taught in the same way (The Economist, 2011).”

Related Posts (if the above topic is of interest, you might want to check these out):
Book Review â€“ Best Practices for Teaching with Emerging Technologies
Gathering Evidence that Flipping the Classroom can Enhance Learning Outcomes
8 Great Reasons to Flip Your Classroom (and 4 of the Wrong Reasons), from Bergmann and Sams